BALER, Aurora, September 7, 2011-This province has retained its status as the most peaceful province with the lowest crime incidence in Central Luzon in 2011 despite the crime waves in thefts and robberies in the provincial capital town.
Aurora province registered 991 crimes from January to July based in the crime statistics from the Philippine National Police Regional Office 3 based in Camp Olivas, Pampanga.
Over the period, crime volume represents only four percent of the 24,401 crime incidents recorded in the entire region.
Stats showed that the province of Bulacan has the highest crime incidence with 9,647 followed by Pampanga with 3,305, Nueva Ecija (2,498), Bataan (2,185), Zambales (1,566) and Tarlac (1,131).
Senior Superintendent Oscar Albayalde, regional intelligence chief said that the 24,401 crimes are lower by 25.77 percent compared to the 32,870 crimes listed over the same period last year.
Albayalde said of these crimes, 13,674 or 56.04 percent index crimes such as theft, physical injuries, robbery, carnapping, rape, murder and homicide while the remaining 10,727 (43.96 percent) are non-index crimes.
He said that 3,395 or 13.91 percent of these crimes are considered “solved” where the suspects have been arrested and charged in court while 5,207 or 21.37 percent are considered “cleared” where cases have been filed but the suspects are at large.
Albayade attributed the dip in regional crime incidence to intensified police visibility in the streets and the conduct of massive simultaneous checkpoint operations targeting motorcycle-riding criminals.
Albayade said that the regional PNP, led by Chief Superintendent Edgardo Ladao also launched “I-Text Mo, Aksyonan Ko (Text and I will Act)” giving citizens a chance to report crime incidents in their locality through text messaging and the “Wanted Ka, Huli Ka! (You’re Wanted, You’re Caught)” website providing information on most wanted criminals in the region. 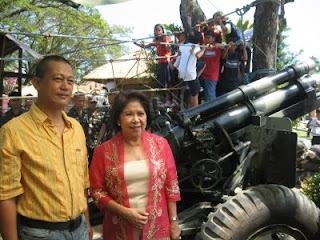 Governor Bellaflor Angara-Castillo lauded the PNP crime report. She said that we should be proud of the report, adding that the province was adjudged as the best performing local government unit (LGU) in the region and the 48th Infantry “Guardians” Battalion was adjudged best battalion by the 7th Infantry “Kaugnay” Division recently. (Jason de Asis)
Posted by Unknown at Tuesday, September 06, 2011