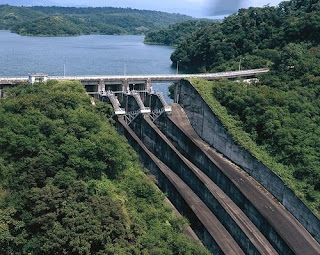 PANTABANGAN, Nueva Ecija, June 15, 2011-Ironically, a God forsaken barangay in the home of the giant Pantabangan Dam has finally received irrigation after almost half-a-century with the installation by the National Irrigation Administration (NIA) of a mini-dam which turned an initial 170 hectares of purely cogonal lands into verdant and fertile farms.
NIA regional irrigation manager for Central Luzon Manuel Collado said that a total of 650 hectares of farmlands will be supplied with irrigation upon completion of a P298-million Teruvian Dam (TD) which initially watered areas planted to palay in Barangay Conversion, saying that the TD refers to a free-fall dam wherein irrigation water falls freely from a mini-dam and connected to a stilling pool using high-density polyethylene pipes.
“This type of dam is most suited in Conversion because the current there is strong and the slopes are stiffer,” Marcelino Santos, assistant regional director said.
Conversion, Pantabangan’s largest barangay covering an area of 6,000 hectares, belong to the original barangays of the old township which was submerged to pave the way for the construction of the World bank-funded Pantabangan Dam in the 70s. The dam now irrigates 102,000 hectares of agricultural lands in Central Luzon but not a single drop of water flows to Conversion which was relocated one kilometer upstream and was isolated from the rest of the barangays.
Conversion is now more accessible eight kilometers from Carranglan municipality when the rest of this town’s barangays can be reached by passing through Rizal and San Jose City.
Antonio Reyes, former president of the NIA Employees Association and a resident of this town said that because Conversion was made an “outcast” from the Pantabangan Dam, he and other officials of the association asked NIA last year to finance the construction of the mini-dam so farmers in the rain-fed area would receive irrigation.
Collado and then-NIA administrator Carlos Salazar approved the funding for the project which was finally realized when Antonio Nangel was appointed NIA administrator by President Aquino.
Nangel released P110 million for the project’s three phases. Pantabangan Mayor Romeo Borja Sr. also provided a counterpart funding from the municipal government equivalent to 30% of the project’s direct cost.
Last January 2010 when the dam construction started then a test run conducted by NIA officials and engineers yielded positive results as water flowed in the area nine months later.
Juanito Jampil, NIA provincial irrigation officer for Nueva Ecija,  recalled that before it was constructed, some farmers in Conversion were skeptical about the project’s viability since water from the dam would be sourced from the Diaman River in Nueva Vizcaya which is below the project area. Water from the river would be made to flow through connecting pipes and impounded in a stilling pool located two kilometers away.
Wilfredo Riparip, barangay chairman of Conversion, said that the farmers, like the proverbial Doubting Thomases, could not believe water would climb from the river to the stilling pool.
He said one of them, Eladio Carpio even bragged he would have his body amputated if water could flow in the stilling pool from the dam. “Believe me, I would have by waist cut if water will come out from the dam,” he quoted Carpio as saying in Tagalog.
When the mini-dam finally flushed out water, Riparip said Carpio was nowhere to be found.
Engineer Martin Eduarte, NIA regional designer explained that this is made possible by force of gravity which pulls water from the river upward into the stilling pool.
“The farmers harvest an average of 100 cavans per hectare during the dry season from what once were desolate lands, so isolated these were dubbed Conversion’s version of “Marlboro Country,” in mock reference to a place in a popular TV ad of a leading cigarette brand showing a cowboy negotiating a dusty, isolated place,” Eduarte said.
Engineer Roberto Pascual, manager of the merged Bulacan, Aurora and Nueva irrigation management offices said that from cogon country, Conversion is now palay country because of the project and turned lush and green.
Billy Soriano, president of the irrigators’ association in Conversion said 98 farmers now benefit from the project and they are now planning to venture into onions with water now available. He said up to 200 farmers in the area will benefit eventually once the irrigation facility’s two other phases, are fully completed.
Meanwhile, to assist farmers in their post-production, Nangel has promised to provide post harvest facilities to uplift their source of livelihood. (Jason de Asis)
Posted by Unknown at Tuesday, June 14, 2011