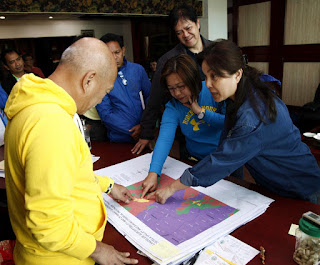 Senator Loren Legarda discusses the details of a geohazard map with Compostela Valley Governor Arturo Uy and 1st District Rep. Ma. Carmen Zamora during the turnover of geohazard maps for municipalities of Compostela Valley at the Provincial Capitol in Nabunturan. Looking on are 2nd District Rep. Rommel Amatong and other local officials of the province. Legarda, Chair of the Senate Committee on Climate Change, visited the provinces of Compostela Valley and Davao Oriental, which were greatly affected by Typhoon Pablo, and distributed geohazard maps to LGUs in the two provinces.
Posted by Unknown at Tuesday, January 08, 2013 5 comments:

MANILA, January 8, 2013-Senator Francis "Kiko" Pangilinan says that the Philippine National Police will need to intensify its efforts in keeping the peace and maintaining order in the country so as not to spoil the economic gains that have defined most of 2012 and the start of 2013.
"Heto nang umaarangkada na ang bansa at talagang gumaganda na ang ekonomiya, at heto na naman tayo na sinasalubong ng mga nakakabahalang balita ukol sa kriminalidad," Pangilinan points out. "We are being eyed by foreign investors and tourists alike, and all the government's efforts will be for naught if we are unable to address these alarming cases of gun-toting elements gone wild."

Separate shooting incidents in Cavite and Quezon, and the death of a seven-year old from a stray bullet, have been reported at the start of the new year. The shooting in Quezon has revealed details that could incriminate police personnel and a possible violation of engagement protocols.
"The last thing we need right now is for the public to feel unsafe outside their homes, and for our police to be mired in yet another controversy. Our economic gains will mean nothing if we can't maintain peace and order in the country. We will all need to work together to make progress happen, and we will need a PNP that is resolute in its efforts to maintain peace and order in a country that is on the verge of making great breakthroughs in the Southeast Asian Region. Key to economic progress is a modernized criminal justice system, and critical in this modrnization is a professional police organization," the lawmaker reiterated.
Posted by Unknown at Tuesday, January 08, 2013 No comments:

MANILA, January 8, 2013-Senator Loren Legarda today announced that the Department of Education (DepEd) and her Luntiang Pilipinas foundation have selected the winners of the “Best School Forest Park” Program and will award them in a formal ceremony at the DepEd’s  Bulwagan ng Karunungan on January 10.

Legarda, Chair of the Senate Committee on Climate Change and founder of Luntiang Pilipinas, said that they will announce the 16 regional winners, from which the five national finalists were chosen.

“The Luntiang Pilipinas is relentless in its efforts to encourage tree-growing activities in all parts of the country and promote awareness on the importance of trees in making our environment lively and safe. I thank the DepEd for partnering with Luntiang Pilipinas in the Best School Forest Park program, which is a very good opportunity to engage a younger audience in environmental protection,” she explained.

The Senator said that all 16 regional winners will be awarded 20 computer units to create a computer laboratory in their respective schools. The five national finalists will be given trophies and the national winner will receive a plaque and Php 1,200,000 for a new school building.

“I hope that even after we have awarded the winners, all schools in the country will continue to nurture their forest parks. May this program also inspire private learning institutions to create their own forest parks,” Legarda stressed.

“Trees are essential and crucial to our survival, especially during these times when inundation, flood, drought and pollution have alternately caused harm and danger to our communities. We must educate our children about the importance of trees, and in doing so inculcate in them the love for our environment,” Legarda concluded.
Posted by Unknown at Tuesday, January 08, 2013 5 comments:

Observe Cleanliness During Feast of the Black Nazarene - Legarda

MANILA, January 28, 2013-Senator Loren Legarda reminded devotees of the Black Nazarene to maintain cleanliness during the parade expected to be attended by millions tomorrow in the Quiapo Church area.

“The Feast of the Black Nazarene is a very important day for many Filipinos, especially for the devotees. But every year as this religious occasion is held, tons of garbage are left behind. I would like to remind everyone to show their respect to the Black Nazarene by first and foremost keeping our streets clean before, during, and after the parade,” she said.

Legarda noted that according to the Metro Parkway Cleanup Group of the Metro Manila Development Authority (MMDA), at least 1,000 sacks of garbage were collected after the parade last year.

“I would also like to stress the importance of safety and security for all the devotees. Let us take great pains in order to ensure that no one is injured or killed, that crimes like pickpocketing are avoided, and that there will be no vehicular accidents. Proper precautions should be taken by the authorities as well as the devotees themselves,” she stressed.

“The Feast of the Black Nazarene is auspicious because it celebrates the enshrinement of the Black Nazarene in Quiapo Church. As we reflect upon the sufferings of Christ and find clarity and meaning in our lives through Him, let us also show compassion towards our fellow Filipinos and the environment,” she concluded.
Posted by Unknown at Tuesday, January 08, 2013 5 comments: