Be on High Alert for Typhoon Quinta—Legarda

“Several provinces in Visayas and Mindanao have been given storm signal warnings by the NDRRMC. Under signal number 2 are Eastern Samar, Western Samar, Leyte, Southern Leyte, northern Cebu, Camotes Island, Bohol, and Biliran in the Visayas, and Dinagat Province, Siargao Island, and Surigao Del Norte in Mindanao. As the storm already made landfall today, we hope that local government units have led all citizens in preparing for the possible consequences. Our people should not hesitate to evacuate, more so if they are living in hazardous areas,” she said.

Legarda, the UN Regional Champion for Disaster Risk Reduction and Climate Change Adaptation, said that everyone must know whether their geographical location puts them at high risk or not.

“Filipinos in every barangay need to know this information, and with early warning signals at least seven days before any typhoon arrives, we will be able to radically minimize the casualties. This is why we have been advocating the use of geo-hazard maps,” she stressed.

“Barely three weeks have passed since Visayas and Mindanao were ravaged by Typhoon Pablo, which caused the death of 1,067 Filipinos and about 37 billion pesos in damages. The arrival of Typhoon Quinta is proof that stronger and more frequent weather disturbances are the new norm, and we cannot, even for one moment, be complacent. Thousands of lives are at stake, and I urge the cooperation of LGUs, non-governmental organizations, and citizens on the ground in order to build up our resilience to these natural hazards,” Legarda concluded.
Posted by Unknown at Tuesday, December 25, 2012 No comments: 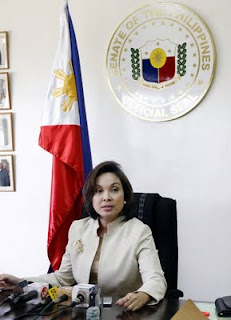 I pray for a peaceful, bountiful and joyful Christmas Season for everyone.

May we all be grateful for the blessings received and welcome the coming year full of hope and with a strong resolve to make our communities safe from disasters.

I wish everyone a green and safe Christmas and New Year.

Posted by Unknown at Tuesday, December 25, 2012 No comments: