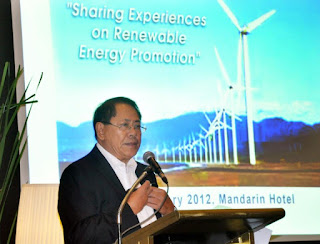 BALER, Aurora, January 4, 2012-Senator Edgardo J. Angara yesterday said that he is confident in endorsing his younger brother Baler Mayor Arthur J. Angara to run for governatorial bid in the province due to his 18 years of service as an effective administrator as Mayor in this town.

In a brief interview, the veteran law maker said that Arthur was six (6) terms Mayor since 1992 up to this time; ensuring that he is convinced in the performance of his brother as his substitute and believing Arthur will win as governor.

“I love my province and I am sure that through my brother, Aurora will still be in good and safe hands for the best development, besides Arthur is the head of the Mayor’s League in this province, a model family and father, an achiever and outstanding Mayor,” the Senator said.

In explaining his withdrawal from the gubernatorial race in this province, the Senator said that his international commitments with the Centrist Democrat International (CDI) – an alliance of ruling parties in Europe and Latin America who promote Christian democracy; the Canadian Institute's Anti-Corruption Compliance Conference (ACCC) – an international group focused on anti-corruption measures; and the Angara Center for Law and Economics made him reached his decision for withdrawal.

The senator said he was elected as vice president for Asia Pacific of CDI, which will be holding its next executive meeting in Manila this year.

He also said that the ACCC has asked him to take over after it holds its Manila conference this January and is scheduled to sponsor the Anti-Corruption Conference of the Global Organization of Parliamentarians Against Corruption.

“My international commitments were the reasons why I decided to withdraw in running as governor and it would be discriminating to the people of Aurora if I won and I will not be able to stay in our province due to my international commitments. Siguradong matatali ako ng husto pagkapanalo ko at kailangan ko ding matulungan ang anak kong si Sonny Angara,” Angara emphasized.
“I will be substituted by Mayor Angara, the head of the Mayor’s League in Aurora who has been, I think an outstanding mayor of Baler and he is an achiever and I am positive he will get elected as governor and I can support Aurora including, as well as the country through this international organization and my work here in Manila, I think I will do a better job of providing the back-up support to the people of Aurora,” he added.


Angara's second term as senator will end this year and he will no longer be qualified for re-election. His son, Aurora Rep. Sonny Angara, will instead be running for a Senate seat this 2013 poll. (Jason de Asis)
Posted by Unknown at Friday, January 04, 2013 8 comments: