Indigenous languages of Phl negritos must be saved says Legarda

MANILA, November 3, 2011-Senator Loren Legarda, Chair of the Senate Cultural Communities today bats for the preservation of the country’s indigenous languages where according to Defenders of the Indigenous Languages of the Archipelago (DILA) 2003 study, the 32 known languages of the Negritos here are already endangered as she expressed support over current efforts to save such heritage.
She stressed that many of our indigenous languages would face extinction if we fail to preserve and promote these kinds of national heritage. Language is not only part of our culture and history but also an important aspect of our identity as a nation.
The Senator said that according to the DILA, several native languages have become endangered due to social and economic forces.
“Many indigenous peoples groups have chosen to abandon their mother tongue and have shifted to languages that are perceived as superior because it would make them easier to become part of the community that they live in and opens greater economic opportunities particularly in employment,” Legarda said, explaining that one of the proposed solutions by the DILA to save the country’s indigenous languages is the Mother Tongue Based Multi Lingual Education (MTB-MLE) with a Culture-Based Curriculum (CBC)—an approach that uses the first language or mother tongue as medium of instruction in the child’ early years of education and which is now being undertaken by the Department of Education.
Legarda pointed out that studies have shown that the use of the first language as the medium of instruction contributes to students’ better performance in school. Thus, the Mother Tongue Based Multi Lingual Education is a mechanism we can use to save our languages and help our children learn more effectively.
Legarda concluded that majority of Filipinos use Tagalog and English, but this does not mean we must care less or abandon our indigenous languages, which are in fact the first languages of our ancestors. It is only right and just that we preserve these languages as a sign of our respect for our history and heritage. (Jason de Asis)
Posted by Unknown at Wednesday, November 02, 2011 No comments:

A glimpsed on Halloween and its origin 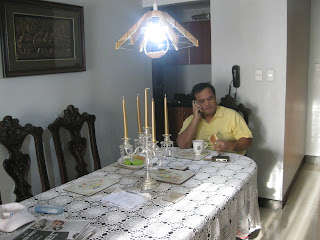 BALER, Aurora, November 2, 2011-In todays halloween’s growing popularity in Aurora and the rest of the world where it became something traditions for Christians and non Christians, Aurorans celebrated it with gaiety and others with seriousness.
Historians said that the word hallowe'en or All Hallow's Eve combines pre-Christian and Christian traditions.
Historian Nicholas Rogers, who researched the origins of Halloween revealed that while "some folklorists have detected its origin in the Roman feast of Pomona, the goddess of fruits and seeds, or in the festival of the dead called Parentalia, it is more typically linked to the Celtic festival of Samhain (pronounced sow-an or sow-in)", derived from the Old Irish Samuin meaning "summer's end".
Samhain was the first and by far the most important of the four quarter days in the medieval Irish and Scottish calendar and, falling on the last day of Autumn, it was a time for stock-taking and preparation for the cold winter months ahead.
There was also a sense that this was the time of the year when the physical and supernatural worlds were closest and magical things could happen. To ward off these spirits, the Gaels built huge, symbolically regenerative bonfires and invoked the help of the gods through animal and perhaps even human sacrifices.
The word halloween is first attested in the 16th century and represents a Scottish variant of the fuller all-hallows-even "evening", that is, the night before all hallows day. Although the phrase all hallows is found in Old English (ealra hālgena mæssedæg, mass-day of all saints), All-Hallows-Even is itself not attested until 1556 falling on November 1st and 2nd respectively.
Collectively they were times for honoring the Saints and praying for the recently departed who had yet to reach heaven. By the end of the 12th century they had become days of holy obligation across Europe and involved such traditions as ringing bells for the souls in purgatory and "souling", the custom of baking bread or soul cakes for all christened souls.
It was traditionally believed that the souls of the departed wandered the earth until All Saints Day, and All Hallow's Eve provided one last chance for the dead to gain vengeance on their enemies before moving onto the next world. To avoid being recognized by a soul, Christians would wear masques and costumes to disguise themselves, following the lighted candles set by others to guide their travel for worship the next day.
In Britain the rituals of Hallowtide and Halloween came under attack during the Reformation as Protestants denounced purgatory as a "popish" doctrine incompatible with the notion of predestination.
In addition, the increasing popularity of Guy Fawkes Night from 1605 on saw Halloween eclipsed in Britain with the notable exception of Scotland. There and in Ireland, they have been celebrating Samhain and Halloween since the early Middle Ages, and the Kirk took a more pragmatic approach towards Halloween, viewing it as important to the life cycle and rites of passage of local communities and thus ensuring its survival in the country.
North American almanacs of the late eighteenth and early nineteenth century give no indication that Halloween was recognized as a holiday. The Puritans of New England, for example, maintained strong opposition to the holiday and it was not until the mass Irish and Scottish immigration during the 19th century that the holiday was introduced to the continent in earnest. Initially confined to the immigrant communities during the mid-nineteenth century, it was gradually assimilated into mainstream society and by the first decade of the twentieth century it was being celebrated coast to coast by people of all social, racial and religious backgrounds.
It was saddening how some Filipinos and here in Aurora celebrated the season of ghouls and witches.
The All Saints’ Day was intended to enhance the feast of the saints but it morphed into something else and no longer about saints but evil.
It is actually not glorifying the saint but a glorification of Satan himself and the parents should warn fellow parents against the “subliminal message” and the danger of dressing up their children as ghosts and goblins.
Parent should instead do something that would enhance the faith and values of their children. The Catholic Church claimed that Halloween has an undercurrent of occultism and is absolutely anti-Christian and I agree with them.
The parents should be aware of and try instead to direct the meaning of the feast towards wholesomeness and beauty rather than fear and terror.
There is a need to celebrate it meaningfully because we would be emulating the saints. We can do whatever we want for as long as you don’t fall down to that level that would be glorifying the evil one. (Jason de Asis)
Posted by Unknown at Wednesday, November 02, 2011 No comments: