time of your life

Posted by Unknown at Saturday, January 26, 2013 No comments: 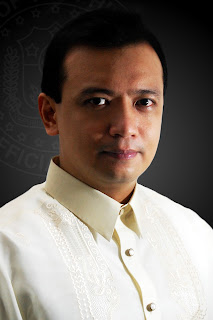 MANILA, January 26, 2013-Senator Antonio “Sonny” Trillanes IV vehemently denied on Sunday malicious text messages circulating recently in military and police camps, tagging him as one of the key sponsors of a bill that would substantially cut back the retirement benefits of police and military personnel.

The supposed “PNP/AFP Retirement Bill” would remove several benefits that military and police personnel will receive upon reaching the mandatory age for retirement, but Trillanes said there was no such bill pending in the Senate.
“This is obviously a black propaganda orchestrated by my political enemies. For the record, there is no such bill filed by this senator existing in the legislative index of the Senate or would I have advocated for such bill,” Trillanes said.

According to Trillanes, he has always been supportive of the causes to uplift the plight of the men and women in uniform being a former member of the Philippine Navy with the rank of lieutenant senior grade.

Among the measures he has put forward in the Senate for the AFP/PNP welfare benefits are:

·       Senate Joint Resolution 5 to increase the subsistence allowance from P90 to P150 per day for AFP personnel;

·       Senate Joint Resolution 8 to increase the combat duty pay of PA and PMAR troops to 25 per cent of their base pay;

·       Senate Bill No. 205 to provide payment of the arrears in the veterans’ pensions and benefits;

·       Senate Bill No. 197 to increase quarters allowance of PNP personnel; and

“Through the years, I have worked toward the uplifting of the lives of our military and police personnel by introducing bills which I hope would have tremendous impact on their professional and economic lives.”

“I was one of the authors of the new Salary Standardization Law which upgraded the salaries of our military and police personnel and all government employees,” he said.

In the same year, he added, the Military Service Board was created to process pending claims of war veterans. Recently, the new AFP Modernization Law, with which he is a co-principal author, was signed into law to extend the AFP Modernization Program for another 15 years and help the armed forces improve their capabilities to deal with internal and external threats.

Trillanes, a staunch supporter of the cause of military and police officers in the country, played an important role in exposing various corrupt practices within the military organization.

This prompted him to rise against the government of then president Gloria Arroyo. He then ran and won a seat in the Senate based on a strong anti-corruption platform and with a strong support from his former colleagues in the military.
Posted by Unknown at Saturday, January 26, 2013 No comments: