CLARK, Pampanga, February 19, 2011-The Department of Energy (DOE) ensures the public that there will be no maltreatment in setting a price in case another oil price hike becomes imperative in the recent strategic planning in Clark Freeport Zone.
DOE Undersecretary Jose Layug, Jr. clarified that it is the mandated to the energy department to monitor oil prices, however, it cannot, at any rate, dictate oil companies to lower their prices, citing that there are times when it becomes imperative for oil companies to raise prices based on the level of price of petroleum products at the world market.
Layug guaranteed that there is enough oil reserve in the country at present and that abuse in oil pricing will never be tolerated, adding that the DOE is currently looking at the possibility of conducting more oil and gas explorations, mentioning about a bill that is bent on being filed at the congress for the purpose of legitimizing more oil and gas exploration activities in the country.
Layug also said that the country has enough supply on electricity, saying that no shortage now, but when summertime comes, the demand scales up tremendously that’s the reason he encourages everyone for the efficient use of vehicles and electricity.
“We need to look at where we can fix the problem especially on electric power industry to ensure that we will not have shortage,” Layug said, reminding the public to conserve oil and energy especially during times when prices of oil and commodities rise. (Jason de Asis)
Posted by Unknown at Saturday, February 19, 2011 No comments: 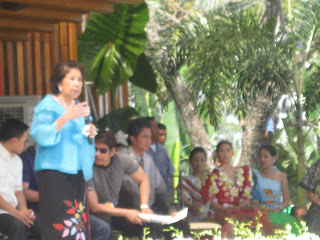 BALER, Aurora, Feruary 19, 2011-Aurorans celebrated yesterday its 32nd foundation anniversary and the 123rd birth anniversary of the late former First Lady Doña Aurora Aragon-Quezon after whom it was named with the usual pomp and pageantry but with a different tack: reminiscing the deadly 1735 “tromba marina” that killed 500 families and wiped out the old township.
For the first time in its annual anniversary celebrations, Aurorans led by Sen. Edgardo J. Angara, Gov. Bellaflor Angara-Castillo, Rep. Juan Edgardo “Sonny” Angara, Baler Mayor Arthur J. Angara and the entire officialdom of the province formally launched the “Kinagunasan Festival, a festival of hope, a celebration of life.”
Angara-Castillo said that the historical event inspired the Angaras to translate and to interpret the occurrence into artistic dances and movements and into powerful sounds and music, the chaos, violence, merry-making, struggles, entertainment and the daily activities of the townsfolk, adding that the festival was launched to show to the public the determination of the people of Aurora to survive trials and challenges. “Not only to survive but to survive with success and rebuild their lives,” she said.
Some 115 students performed the Kinagunasan dance portraying the historic tragedy, complete with props where each of the performing students were given P1,000 each by Angara-Castillo in recognition of their feat.
“Kinagunasan (wiped out) is the local term for the “Tromba Marina” or tsunami that hit the town in 1735. The tsunami was survived by only seven families, including the Angaras, who went up the Mt. Castillo, a neighboring hill now called Ermita Hill. A replica of the old town and the survivors are now placed at the slope of Ermita Hill. Other survivors were the families of Bihasas, Bitongs, Carrascos, Ferreras, Lumasacs and Pobletes, saying that  due to the sad episode of the villagers, the Bitongs migrated to San Jose (now Maria Aurora) and the Bihasas to Inategan (now San Luis). The Angaras were believed to be migrants who came alone with the Franciscan missionaries from neighboring provinces.
This year’s anniversary rites carries the theme: “Broadening Aurora’s Competitiveness in the Global Economy.” Yesterday’s rites started with a morning Mass at the Baler Central School and a street parade and the unveiling of the marker for Baler 400 years monument at the Baler town hall. The Angaras then laid a wreath at the bronze statue of Doña Aurora at the Capitol compound together with Ricky Quezon Avanceña, one of her descendants.
Historians said the killer tsunami hit the town at 2 am on December 27, 1735, risings rapidly that within a few hours, even the terrain where the town existed also vanished.
Fray Jose de San Rafael, then the parish priest of Casiguran town, was on vacation in Baler when the tsunami struck. He swam his way to Point Baja to survive.
The priest recalled that shortly before the tsunami struck, the sacristan major of the convent called his attention to the rising wave engulfing the town. He considered it weird since there was no sign or manifestation of impending bad weather.
After the devastation, a new town was carved on a hilly terrain west of Baler Bay with the old town named Kinagunasan. (Jason de Asis)
Posted by Unknown at Saturday, February 19, 2011 No comments:

Sec. Alcala to concentrate to Aurora’s coconut center and other DA projects

DINALUNGAN, AURORA, February 19, 2011-Agriculture Secretary Proceso J. Alcala yesterday said that his office and the Philippine Coconut Authority (PCA) should concentrate to the Php216 million Aurora Province Coconut Development Center (APCDC) project in a 133-hectare public land under the jurisdiction of Department of Environment and Natural Resources (DENR) located at Barangay Dibaraybay here and other DA projects to address food security and to become supplier of coconut varieties in Luzon.
Alcala said that the research training is pompous in a coconut seed farm to produce quality seed nuts and there is a need to focus in the combined technology in the traditional and modern coconut farming.
“It is a blatant truth that APCDC serves as a great help in northern Aurora to become self-sustainable but we have to choose the best research among them,” Alcala said. “Mag-concentrate tayo patungo sa iisang layunin, mahirap kapag puro research,” he advised.
Alcala also lauded Senator Edgardo J. Angara and Congressman Juan Edgardo “Sonny” Angara for their efforts in building the pioneering facility that will cater to the needs for coconut planting materials in the province and in the whole of Luzon, where the Php5,816,503.41 million two storey administration building, Php1,608,050.38 million perimeter fence, Php 1,847,117.38 million access road and the Php1,101,045.52 million elevated water tank were inaugurated last January 22.
There are eighty six employees who managed and planted coconut mother palm varieties in the APCDC like embryo-cultured macapuno, tacunan dwarf, catigan dwarf, synvar, baybay tall, san ramon tall and open pollinated variety-Baler with a total of 15,553 seedlings and intercrops set.
The APCDC project started on January 5, 2008 and formally established on October 2, 2008 following the signing of Memorandum of Agreement (MOA) of the four (4) implementing agencies such as DENR, PCA, Dinalungan LGU and the provincial government where the funds earmarked for the site development, planting of mother coco palms, construction of laboratories among others for its initial operation, adding that the funding came from the Agriculture and Fisheries Modernization Act (AFMA) appropriations.
Back to Alcala, he ordered the PCA’s for the massive coconut planting and replanting, saying that APCDC will play in the development of coconut industry in the entire Luzon citing the vital infrastructure access road to Central Luzon, Quirino-Madella Dipaculao, Ilocos region, Cagayan Valley, Cordilleras and the Aurora ecozone in Casiguran town.
Sec. Alcala, Bureau of Fisheries and Aquatic Resources (BFAR) director Atty. Malcolm I. Sarmiento, Jr. and BFAR regional director Remedios E. Otangco also launched the fish cage livelihood project in Casiguran mariculture park held at Barangay Dibacong here to provide alternative fish source of income and to contribute food security production of milkfish in addressing the needs of region 2 and 3.
They also visited the Dipaculao Multi species fish nursery where they said that the area in Sitio Lobbot, Brgy. Mijares is the most suitable area for nursery following the turn-over of patrol boat to Mr. Rex Magen, the project manager of Aurora Mariculture Park (Nursery, Hatchery, Sea Cage) to be used by the project to protect the area.  (Jason de Asis)
Posted by Unknown at Saturday, February 19, 2011 No comments: