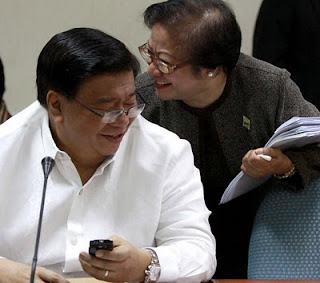 The Senate leader expressed elation over the speedy approval of the national budget, explaining that the president’s go-signal means that the funding appropriated to agencies involved in the ongoing relief and rehabilitation efforts “could be implemented and accessed in time by those who need them.”

Included in the 2014 budget are authorizations worth P100 billion intended for the completion of various relief and rehabilitation programs on regions of the country struck by natural and man-made disasters in the past, especially those in the Visayas region affected by the destruction left by super typhoon Yolanda, stressed Drilon.

It includes the P20 billion rehabilitation fund and another P80 billion under the unprogrammed fund, which shall serve as standby authority and ready authorization for spending for the foreign donations and grants for victims of typhoon Yolanda, he noted.

On top of the P100 billion, the Congress has allocated P13 billion in calamity fund and P4.8 billion in quick response fund. Earlier also, the Congress approved a P14.6 supplemental budget and extended the validity of the remaining P12 billion 2013 calamity funds by another fiscal year, Drilon added. All in all, there will be about P145 billion funds made available in 2014 for the government's rehabilitation of areas damaged by the past calamities, he noted.

“In crafting the budget, the Congress took into consideration the need for urgent aid to our countrymen burdened by the damages of disasters. The sizeable amount of funding is absolutely necessary to equip the government in fulfilling its responsibilities to those left helpless by the calamities,” Drilon pointed out.

With the budget’s approval, Drilon then expressed optimism that the line agencies in the executive would be able to “maximize the allocated funding in service of the Filipino people, to whom the budget is wholly intended for.”

“We will exercise our oversight functions to ensure that every single peso in the budget goes towards the benefit of our countrymen,” assured Drilon.
Posted by Unknown at Friday, December 20, 2013 No comments:

CABANATUAN CITY, Nueva Ecija – The Year of the Water Snake in Nueva Ecija has been a mix of the good and the bad, with the province - the country’s rice granary getting battered by calamities that destroyed billions of crops - some former local officials getting linked to suspected pork barrel scam mastermind Janet Lim-Napoles and the Umalis suffering contrasting fortunes in their respective electoral bids in May.

The destruction wreaked by typhoon Santi in October topped all other news in the province over the past 12 months. The super howler killed at least three people and destroyed P3 billion worth of crops alone, not to mention damage to properties, toppling power lines and turning many areas in the province into virtual wastelands.

The province was placed under a state of calamity and President Aquino was supposed to pay a visit when an earthquake struck , diverting Malacanang’s attention away.

The province just barely survived Labuyo when Santi came. For three full weeks, the province was without power.

On the political front, Gov. Aurelio Umali and his wife, third district Rep. Czarina won third terms in their posts, the former pulling off his fourth poll victory over the Josons, the once proud and mighty dynasty that ruled the province for 48 years.

A third Umali, Board Member Emmanuel Antonio, however, lost in his mayoral bid in Cabanatuan to five-term Mayor Julius Cesar Vergara in their highly anticipated duel preceded by a prolonged word war over the Highly Urbanized City bid being pushed by the incumbent mayor. In April, Vergara and his men were charged with theft before the city prosecutor’s office for allegedly stealing the video camera of a crew from TV 48 identified with the Umalis’ camp.

Emmanuel Antonio’s debacle dealt the Umalis – unbeaten since they entered politics a decade ago – their first electoral defeat.

Year 2013 saw the emergence of new political stars in the province such as Estrellita Suansing of the first district who beat a Joson and Magnolia Antonino-Nadres of the fourth district who survived a disqualification case thrown against her by a political rival for being an American citizen.

Womanization of Nueva Ecija politics has become a byword after several women politicians soundly defeated their male counterparts in the various elective posts. Three of four congressional districts are now ruled by women while three of five cities are now sitting as mayors, the most prominent of whom is Adrianne Mae Cuevas of the provincial capital Palayan where she defeated a former political kingpin who once reigned as mayor and congressman for three terms each.

Shortly after getting reelected, the governor announced that his wife Czarina is seeking the governorship in 2016.

The year saw the rise and fall of dynasties.

The start of 2013 saw the appointment of a Novo Ecijano as the new provincial director of the Philippine National Police. Senior Superintendent Crizaldo Nieves assumed the post in January, replacing Walter Castillejos who has barely warmed his seat.
Nieves, a native of Zaragoza town, survived an acid test with the generally peaceful and orderly conduct of the elections in spite of the fact that 60% of the cities and towns were tagged as hot spots and Governor Umali aired concern over the defective precinct count optical machines (PCOS).

The months before and after the elections were marked by several incidents. Shortly after the polls, the municipal hall in town got burned in a fire, leaving the new Mayor Antonino Lustre with no office.

Prior to the polls, the former three-term mayor of , Ernesto Natividad, was arrested while undergoing dialysis treatment in a hospital. He was believed to have gone into hiding after he was charged with multiple murder along with several others in connection with the attack on a cockpit arena owned by his political rival in 2006.

A flood of sympathy went his daughter Maricel’s way, catapulting the latter into a surprise victory over incumbent Mayor Christian Tinio. The younger Natividad would pull off another surprise, getting married to former San Leonardo mayor Froilan Nagano who just blew his congressional bid.

Violence erupted in Gapan in August when four persons were massacred following an attack by gunmen. The target of the attack, Emerson Pascual survived and tagged barangay chairman Montano Barlis as the one who shot his group. Barlis was later arrested while Pascual was later elected barangay chairman of Pambuan in October.

Later, the election officer of Gapan also got wounded in an ambush, prompting Padiernos to summon the local police to shed light on the situation. The police chief was later relieved.

In May, forester Edgardo de Luna survived an attack by suspected illegal logging syndicates. He was again attacked in June and survived. He was later transferred to another region.

Power was cut off in Pantabangan town in March by the First Gen. Hydropower Corp. allegedly over the failure of the municipal government-owned Pantabangan Municipal Electrification System (Pames) to settle over P50 million worth of unpaid bills. It was the third power cut off in eight months and it was costly for the sitting mayor. who lost as a result.

Also in March, Vice Mayor Ester Lazaro assumed the post of Mayor of the Science City of Munoz after the sitting mayor, Efren Alvarez lost a graft conviction case before the Supreme Court. Alvarez later went missing after a warrant for his arrest was issued. His younger brother,  comebacking former three-term mayor Nestor, trounced Lazaro in the May polls.

Aside from Alvarez, quite a number of local officials also faced charges. Mayor Richard Ramos of Lupao, Mayor Lucio Uera of Pantabangan and others were slapped graft charges.

At least five former municipal mayors, four in southern Nueva Ecija, were identified as having requested in 2006 funding assistance from then-agriculture secretary Arthur Yap. The letters ended up with Napoles’ office at Discovery Suites. The ex-mayors denied receiving the funds.

Napoles was also said to have owned a resort in Cabiao town but local officials had no knowledge that it actually exists.

In July, Novo Ecijanos lost a kababayan in the Cabinet when Antonio Nangel was replaced as administrator of the National Irrigation Administration barely a week after getting scolded by President Aquino. His successor Claro Maranan later relieved six division managers in the province. (Manny Galvez)
Posted by Unknown at Friday, December 20, 2013 No comments: