2,300 houses in northern Aurora still have no electricity Manny Galvez 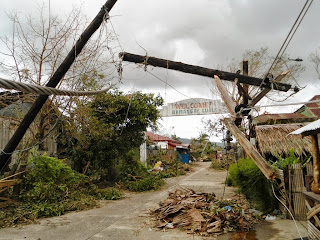 CASIGURAN, Aurora – Some 2,300 households in two municipalities of northern Aurora are still without electricity almost two months since Typhoon Labuyo brought destruction in northeast Luzon.
Noel Vedad, general manager of the Aurora Electric Cooperative, said the households, which are serviced by the power coop, represent roughly 30% of the 7,938 households which power was cut when strong winds brought by Labuyo toppled 324 electric posts and broke 214 others in this town, Dinalungan and Dilasag and in Dinapigue town in Isabela province.
The damage was estimated at P10 million.
Vedad said, however, that they expect power to be restored in Dinalungan and Dilasag by next week.  He said a four-men Aurelco crew has been working on the damaged lines.
Households in this town, totaling 4,188 have been enjoying 24-hour electricity since last month, along with households in  Barangay Nipoo in Dinalungan.
Vedad said the National Electrification Administration released on Thursday P10.7 million to restore the remaining damed power lines.
Earlier, rural electric cooperatives in Central Luzon formed a task force to help Aurelco restore electricity by rehabilitating the 538 damaged poles in the three northern towns.
The RECs, which belong to the Central Luzon Electric Cooperatives Association (CLECA),  created “Task Force Labuyo” composed of 60 foremen and linemen equipped with 11 boom trucks who were dispatched to the northern towns of Dinalungan, Casiguran and Dilasag, also known as the Dicadi area.
The Dicadi area was one of those hardest-hit by Labuyo which left in its wake three persons dead and over P500 million worth of properties, infrastructure and crops destroyed. It also affected 12,000 families in the province alone.
For days, the Dicadi towns were isolated due to landslides, the overflowing of rivers and toppled communication lines.


REC executives, led by National Association of Geneneral Managers of Electric Cooperatives (NAGMEC)-Region 3 and Pampanga Electric Cooperative, Inc.-1 (PELCO1) provided the services for free while Aurelco shouldered the food and shelter to the task force personnel. – Manny Galvez
Posted by Unknown at Friday, October 04, 2013 No comments: