BALER, Aurora, June 6, 2011-Once again Aurorans proved in the province history that eventhough Aurora is one of the smallest provinces in the country the brain and beauty still prevailed no matter what and deserved to be the queen.
It’s really wonderful to see that our provincemate Athena Mae Imperial who hails from Casiguran town won in the recent coronation of 2011 Miss Earth Philippines which was held in Puerto Princesa, Palawan yesterday night.
Among the 48 candidates, Imperial was proclaimed as big winner although she was the shortest among the top 10 finalists, adding that she did not get any special awards even the minor ones. She was also not so tall in the contest but still proved that there’s a chance to be a beauty queen. 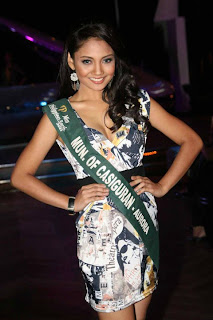 Imperial became a semi-finalist in the Mutya ng Pilipinas 2009 and kept going in joining the pageant. Now, it’s her victory. She is not tall enough for international competition    but she really is the Goddess of the Earth and deserves to be Miss Philippines Earth 2011.
As an Auroran, we congratulate Imperial for winning in the contest the title Miss Earth and must be proud of her now that she is representing the country in the coming Miss Earth 2011 beauty pageant in Pattaya, Thailand.
Imperial’s accomplishment will surely win the country’s television networks and other big companies which have seen her potentials to be their partner in the industry. It’s amazing and I mean it! (Jason de Asis)