Aurora to be the richest province in the country 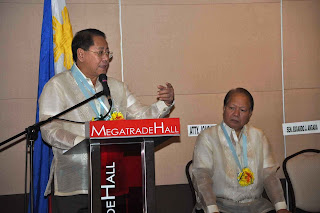 BALER, Aurora, August 20, 2011-Senator Edgardo J. Angara revealed that Aurora can be the richest province in the country, saying that the Philippines may be able to achieve energy self-sufficiency because of Benham Rise, a submereged volcanic ridge near the province which is very rich in natural resources here in Central Luzon.
“After its claim to own an undersea land almost the size of Luzon is getting fruitful, Department of Environment and Natural Resources (DENR) Secretary Ramon Paje, the United Nations Convention on the Law of the Seas (UNCLOS) is currently deliberating the handover to the country of the Benham Rise,” Angara said.
The country will not only gain 13 million hectares in additional territory, nearly the size of Luzon, should UNCLOS approve the claim, but also a potentially oil-rich region.
“The Benham Rise can provide our country its own energy, and also set off the opportunity to export gas, copper and other minerals,” Angara said.
The veteran Senator said that the country can provide us for its own energy, revealing that DENR studies for the past five years in the Benham Rise showed huge methane deposits that poses the province as a possible natural gas exporter.
“Kaya nitong lunurin ang buong mundo sa dami ng mineral deposit. We are the only claimant of Benham Rise which bolsters the country’s bid to own it unlike the disputed Spratly Islands and Scarborough Shoal in the west side,” Angara said.
“Once UNCLOS decides the submerged mass is sitting in Philippine territory, exploration operations could start to determine the size of resources in the plateau,” he furthered, explaining that the submerged volcanic ridge was within the country's 370-km exclusive economic zone.
He recalled that the government submitted the claim to the United Nations last 2009 for the rights over the plateau which was known as a massive formation of basalt, a common volcanic rock, and is described in a study as a thickened portion of the Philippine sea plate’s oceanic crust.
It is bounded by the West Philippine Basin to the north and east, off the coast of Aurora and Isabela provinces.
“I reiterated that the province will be still the laboratory for development. This coming September the Benham Rise will be ours. The certificate of title will come out stating that the Philippines (our province) is the owner of it. (Jason de Asis)
Posted by Unknown at Saturday, August 20, 2011

Let us wait and see...Corruption is everywhere???

I like this news Jason. As far as I know Sen. Ed is working on it.

Yahhh, I already heard it at the DENR main office. It's a great priviledge for the province of Aurora and Isabela. These will surely boom their economic activities especially the Aurora Pacific Economic Zone in Aurora province. The leaders of Aurora are so hardworking. Within five years, I witnessed the fast development of roads and tourism boom in the place. I heard that Isabela gov. Dy will also working for the Benham Rise development and looking for big investor to join for its progress.

For sure it will benefit Isabela and Aurora. Gov. Dy and Gov. Angara-Castillo should create a comprehensive master plan for the benefit of the local populace first before the multi-billionaire investors come in. (Bobot Upre of Kawayan, Isabela)

Let us wait and see who will be benefited...hmm...

Has anyone checked Registry of Deeds if this undersea land has been Titled to you-know-who? Just like every other choice real property in Aurora !!!!!!

to see is to believe!!

Dumagat indigenous peoples from Aurora Province hold a protest walk at the University of the Philippines in Diliman before marching to Malacañang on Monday. The group claimed they have been displaced by the Aurora Pacific Economic Zone (APECO), an industrial zone which Sen. Serge Osmeña claims only benefits the Angaras.