BALER, Aurora, August 24, 2011-A Philippine Army sustained minor injury when the government troopers raided and overran a New People’s Army (NPA) camp in Sitio Balagbag, Barangay Dimanayat, San Luis, Aurora Tuesday after a fierce battle with the elements of 48th Infantry “Guardians” Battalion, Charlie Company led by 2lt Edwin Lauro.
Lt. Col. Kurt A. Decapia identified the wounded in action as PFC Erwin Dacayo, a native of Guimba, Nueva Ecija who was already brought at the Armed Forces of the Philippines (AFP) Medical Center, V Luna road, Quezon City for medical treatment and now is in a stable condition.
Decapia said that his troops were dispatched to hinterlands of Dimanayat for the purpose of giving clothes, foods and medical mission for the villagers. “The army took foot patrol for several days from Brgy. Diteki to the coastal barangays of San Luis town,” he added.
At that juncture, he said that the villagers and rebel returnees of Brgy. Diteki reported the presence of the rebels in Balagbag area. He immediately called the group of 2lt. Lauro to conduct combat operation in the place; thus, the army encountered more or less fifty (50) rebels at around 6:20 yesterday morning at Balagbag area.
The army encountered the group of Gregorio Torres, Alias Ka Lenny/Jake who is the leader of the regional yunit guerilla (RYG) together with the other rebels in Central Luzon who gathered in the place to conduct atrocities in the province.
“The rebels are projecting that they are still strong and migrating to show proof of their strength. They are few, they just combined themselves as a group from different provinces to conduct atrocities here in the province, but they failed due to the early reports from the residents of Diteki,” he said.
He said that the group of 2lt Lauro overran the said communist rebel camp after an almost an hour of gun battle, believing that many rebels were either killed or injured, as blood stains were seen along the rebels’ withdrawal routes.
The military initially recovered from the camp of the rebels, 1 bag of explosives, 2 bags of subversive documents and personal belongings.
As of this report, an operation manhunt and blocking operation are being conducted by the 48th Infantry Battalion against the rebels. (Jason de Asis)
Posted by Unknown at Tuesday, August 23, 2011 7 comments:

Operation manhunt versus rebels in Aurora to continue 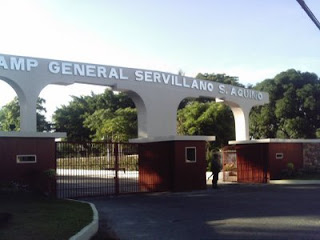 CAMP AQUINO, Tarlac City, August 23, 2011-Northern Luzon Command (NOLCOM) Chief Major General Jessie Dellosa said that the operation manhunt against the New People’s Army (NPA) will continue to maintain the stability of the peace and order in the entire province.
“The troops led by Lt. Col. Kurt Decapia are inspired and motivated to disrupt the NPA’s extortion activities and show of force in the recent manifestation of the villagers full support to the 48th Infantry Battalion, Philippine Army,” Dellosa said, following the foiled harassment and ambush of Bayanihan Patrol Team of soldiers in Barangay Diteki, San Luis, Aurora last August 12 that led to the recovery of improvised explosive devices.
Three days after, local officials and hundreds of villagers led by Barangay Capt. Maria Fe Rios gathered at Barangay Diteki basketball court in San Luis and openly denounced the atrocities perpetrated by the NPA.
NOLCOM spokesperson Captain Jovily Carmel Cabading said that there is no let-up in the pursuit operations being conducted by government forces against the remaining NPA members.
“The army troopers are trying their best to send a message to the NPAs that they are just being used and abused by their leaders who do not want this armed conflict to end,” she said, adding that the government already re-opens the venue for a sincere “peacetalk” where rebellions will hopefully be resolved in time.
Cabading said that they send message to the rebels that there is a pressing need to give this “peacetalk” a chance to succeed, saying that these atrocities in Aurora will not help anyone achieve genuine peace.
Cabading revealed that one soldier identified as Private First Class Erwin Dacayo was slightly wounded in today’s hot pursuit operation conducted at around 6:20 in the morning.
The elements of Charlie Company, 48th Infantry Battalion led by 2lt Edwin Lauro caught up with the armed rebels in Barangay Dimanayat, in their temporary ‘put-up’ camp. NPA’s personal belongings and some subversive documents were left behind as they run for their lives.
Back to Dellosa, he said that it is obvious that the rebels are anti-development and so they will block any progress in the province.  The statement made by Senator Edgardo Angara lately that Aurora can be the richest province in the country because of the Benham Rise (a potential source of energy) might have fueled their (NPA) desire to disrupt peace in the communities.
Lt. Col. Kurt Decapia emphasized that their unit is open for dialogue even in any means of communication for the fleeing NPAs who wish to surrender to the government. (Jason de Asis)
Posted by Unknown at Tuesday, August 23, 2011 2 comments: