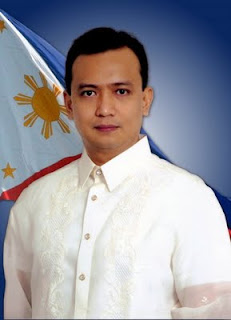 MANILA, September 5, 2011-To avoid politicking in the Armed Forces of the Philippines (AFP) appointment or promotion, Senator Antonio “Sonny” F. Trillanes IV bats to strengthen the promotion system within the AFP by exempting lower-ranking officers from confirmation by the Commission on Appointments (COA) in concurrent resolution No. 9 which he filed at the senate.
Trillanes wants to amend Section 16, Article VII of the 1987 Constitution to allow the AFP and the Department of National Defense (DND) to have supervision and discretion over the appointment or promotion of military officers from colonel or naval captain and up except those of the service chiefs of the Army, Air Force and the Navy and the Chief of Staff of the AFP.
The President shall nominate, and with the consent of the Commission on Appointments, shall appoint the heads of the executive departments, ambassadors, other public ministers and consuls, or officers of the armed forces from the rank of captain or naval captain, and other officers whose appointments are vested in him in the Constitution under the 1987 Charter.
“The AFP and the DND can more than adequately screen the fitness and qualifications of lower ranking officers for such appointment or promotion,” Trillanes said.
The former Navy officer explained that the practice of confirmation by the COA from the rank of colonel or naval captain has unfortunately led to the political polarization of the AFP. Military officers up for appointment or promotion are being forced to play politics and kowtow to the desires and wishes of politicians in order to ensure that their appointments or promotions shall not be unduly blocked, regardless of the merits of such appointments or promotions, adding that this requirement is adversely affecting the promotion system in the AFP, which is supposed to be based principally on merit, fitness and qualifications instead of political connections.
The confirmation of the service chief’s of the Army, Air Force and Navy and the position of chief of staff of the AFP shall remain under the CA under the bill.
He added that needless to state, the Office of the President and the promotions board of the AFP and the DND are more than qualified and equipped to screen, vet and decide who among the officers of the AFP are qualified for appointment or promotion; thus, the requirement of compelling all officers of the AFP from the rank of colonel or naval captain to undergo the confirmation process is clearly superfluous.
Trillanes said that he pursue reforms for the welfare of men and women in uniform of the AFP. (Jason de Asis)
Posted by Unknown at Sunday, September 04, 2011 No comments:

Forum to address dangers of internet on children

MANILA, Sept. 4, 2011—The Pro-life Philippines Foundation will hold a forum to address the dangers of unregulated exposure to the internet on children.
The forum seeks to educate the public on the upshots of a developing tech savvy culture in the country.
With their easy access to the internet, children become exposed to questionable values peddled online and child predators lurking in cyberspace.
Titled “Crimes against Children and Online Safety”, the forum will have Mr. Daniel Wartenweiler, Director of Onesimo Bulilit Foundation, Inc. as resource speaker. His talk will dwell mainly on how to keep children safe on the internet.
The seminar targets to reach parents, guardians, teachers, catechists, Church and lay leaders, social workers, counsellors/life coaches, youth group advisers and others who have direct contact with children and youth in their line of work.
Slated on September 24, the forum will be from 8:00 am to 12:00 noon at the St. Joseph Retreat House in Bustillos, Sampaloc.
A registration of P300 will be asked from participants. The fee will cover one seminar kit, one snack and a certificate of participation signed by organizers.
Anyone interested may call up for additional information 733-7027; 734-9425, text through mobile# 0919-2337783; or email life@prolife.org.ph. (CBCPNews)
Posted by Unknown at Sunday, September 04, 2011 No comments:

VIGAN City, Sept. 4, 2011—The Benedictine Nuns of the Eucharistic King (BNEK), together with the faithful of Vigan, celebrated the abbatial blessing of Very. Rev. Mo. Abbess Maria Cielo Cortez, OSB at the Immaculate Heart of Mary Abbey, on August 30.
Adorned with simplicity, the rare occasion of abbatial blessing was headed by Nueva Segovia Archbishop Ernesto A. Salgado, who is known to be an oblate of said monastery, with newly ordained Bishop David William V. Antonio and Lingayen-Dagupan Auxiliary Bishop Renato P. Mayugba, in the presence of San Beda Abbot Tarcisius Narciso, OSB. A number of priests close to the nuns concelebrated the Eucharistic celebration.
The Gospel reading of the blessing centered with the passage of the Good Shepherd. Archbishop Salgado reminded the community and especially Mother Abbess that, “Jesus the Good Shepherd leads His flock to green pastures. Jesus care for them. The Abbess of the community provides for the needs of her sisters especially in their spiritual food by her caring words and examples.”
Archbishop Salgado stressed to Mother Cielo that being an Abbess places her in the authority of her community and that this authority means serving her sisters.
Mother Cielo then received the Rule of Saint Benedict as her guide in her monastic duty, the ring which serves as a bond to her commitment, and the shepherd’s staff which symbolizes her pastoral duties to her community.
Mother Cielo hails from the Diocese of Legazpi and was born on July 23, 1954 at Guinobatan, Albay. She was christened with the name Elizabeth by her late parents, Thomas Cortez and Elizabeth Averilla.
Before entering the monastery, she studied Psychology and worked in different well-known companies in Metro Manila. On May 23, 1993 after a period of intense discernment, she entered the Immaculate Heart of Mary Abbey (IHMA) in Vigan, to become a member of the BNEK.
She professed her final religious vows on May 4, 2002 and was assigned to Rosa Mystica Cella house in Nalseb, Tublay, Benguet, which serves as the nearest chapel for the people of that mountainous terrain. She was later sent to Rome to take monastic formators studies.
On July 23, 2011, at her 57th birthday and her 18th year as a nun, she was elected by her own community as the 5th BNEK Abbess succeeding Rev. Mo. Celeste Nidea, OSB, who retired from her 12 years of service as abbess of the community.
The Benedictine of the Eucharistic King (BEK), composed of nuns and active sisters, was founded on April 2, 1929, by the late Rev. Mo. Edeltraud Danner, OSB, the first abbess who was originally a Benedictine Missionary Sister of Tutzing, with the acceptance of then Nueva Segovia Bishop Santiago Sancho in his own diocese.
It was in Baguio where the foundation was made public and stayed there until 1933 when Mountain Province and Baguio was separated from Nueva Segovia. The whole community was transferred to Sta. Maria, Ilocos Sur in 1944 until once more on May 30, 1947 it was transferred to its present location in Vigan because of the growing community.
On May 18, 1986, the BEK was finally divided into two BNEK for the nuns and the Benedictine Sisters of the Eucharistic King (BSEK) for the active sisters having been granted autonomy by the Holy See to form their own congregation.
There are now four BNEK monasteries in the world – IHMA in Vigan; Abtei Maria Frieden in Kirchschletten, Germany; Our Lady of Peace Monastery in Digos, Davao del Sur; and Our Lady of Divine Providence Monastery in Calapan, Oriental Mindoro. The IHMA serves as the mother house of the congregation where the three others were founded.
The predecessors of Mo. Cielo are late Rev. Mo. Edeltraud Danner, OSB (1950-1973); late Mo. Rosemarie Enriquez, OSB, the first Filipina abbess (1973-1993); Mo. Ehrentrudis Fernandez, who is now in Calapan (1993-1999); and Mo. Celeste Nidea, who stays in Vigan (1999-2011). (Mark Vertido)
Posted by Unknown at Sunday, September 04, 2011 No comments: 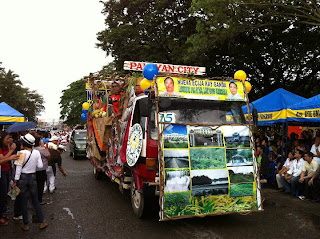 CABIAO, Nueva Ecija, September 4, 2011-A local historian here Friday revealed that Novo Ecijano revolutionaries led by General Mariano Llanera conspired with the parish priest of this town in launching the historic “Unang Sigaw ng Nueva Ecija” 115 years ago which led to the conquest of the Spanish garrison in nearby San Isidro town.
Historian Jose Hipolito Jr. said that unknown to many, Llanera met secretly with revolutionary leaders from Arayat and Bacoor, Pampanga in the compound of Don Andres Romero and plotted the revolt in the eve of September 1, 1896.
Among those present in the meeting called by Llanera were Don Mariano Alejandrino of Arayat, former kapitan municipal Alipio Tecson, Silvino Sagcal, kapitan municipal Pantaleon Valmonte and Romero.
Hipolito said that the planned revolt had the blessings of parish priest Monsignor Saturnino Parungao.
“Before Llanera’s group marched to San Isidro, they even went to the St. John in Cabiao to hear Mass,” he said.
He said Llanera’s group proceeded to San Isidro at around 3 in the morning of September 2 and upon reaching the boundary of the two towns, started playing the musical instruments signaling the assault.
Hipolito narrated the “conspiracy” during the commemorative rites presided by local officials led by Mayor Gloria Congco at the municipal compound here Friday. 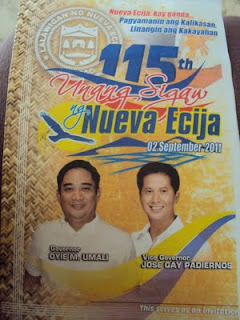 Hipolito earlier pointed out certain “historical errors” about the revolution, prompting Malacanang to call the attention of the National Historical Commission of the Philippines (NHCP) to look into them to put the “Unang Sigaw” in its proper perspective.
Secretary Herminio Coloma of the Presidential Communications and Operations Office (PCOO) said the NHCP, led by its executive director Ludovico Badoy should conduct a thorough research on the historic event and make facts and figures accurate and realistic to give justice to its heroes.
Hipolito said one of these errors include accounts that up to 3,000 revolutionaries from this town marched towards San Isidro with the use of a “musikang bumbong,” saying only 753 revolutionaries laid siege in San Isidro and they marched there accompanied not by “musikang bumbong” but by a brass band.
Aside from the glaring historical inaccuracies, Congco also questioned why the center of celebrations for the annual event is often held in the provincial capital Palayan City and not in this town. She said she had nothing against holding festivities in other towns to commemorate the event for Novo Ecijanos to appreciate history but said Cabiao’s role should be given utmost importance. 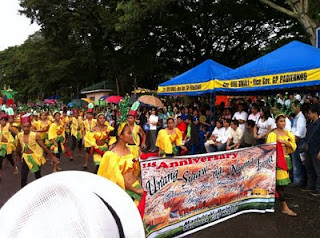 The event marked the day when Llanera and Valmonte led home-grown revolutionaries, armed only with 100 guns, bolos and pointed sticks in assaulting the Spanish garrison in San Isidro on September 2, 1896, two days after the “Unang Sigaw ng Balintawak.”
Waving black and red flag, the revolutionaries caught the Spanish guardia civil by surprise.
For its role in the revolution, the province earned its place in the Philippine flag as one of the eight rays of the sun, each ray representing the province that revolted against the Spaniards.
“This revolutionary conspiracy was the untold story in this town,” Hipolito said. (Jason de Asis)
Posted by Unknown at Sunday, September 04, 2011 No comments: