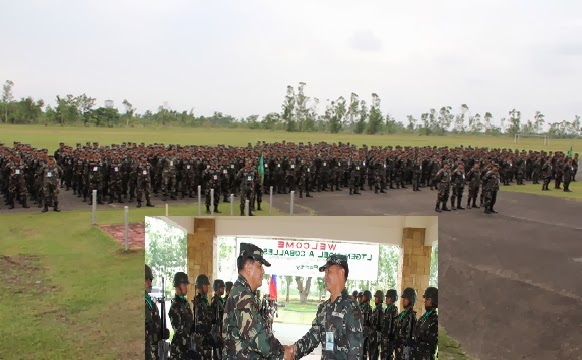 FORT RAMON MAGSAYSAY, Nueva Ecija – The 7th Infantry (Kaugnay) Division under the leadership of Maj Gen Hernando DCA Iriberri warmly welcome the Commanding General of the Philippine Army, Lt Gen Noel A Coballes Armed Forces of the Philippines last December 18, 2013.
The Philippine Army Chief, Lt Gen Coballes, is the Guest of Honor and Presiding Officer (GOHAPO) of the Change of Command Ceremony of Commander, Special Forces Regiment (Airborne) (SFR(A)) and Assumption of Command Ceremony of Special Operations Command (SOCOM), Philippine Army.
A change of Command Ceremony is a military tradition that present a formal transfer of authority and responsibility for a unit from one commanding officer to another. The passing of colors, standard and insignias from an outgoing commander to an incoming one ensures that the unit and its soldiers is never without official leadership, a continuation of trust, and also signifies an allegiance to the unit’s commander.
“First of all would like to greet the Officers, Enlisted Personnel, and the Civilian Employees of the 7th infantry Division, a Merry Christmas and a Happy New year to all.  The 7ID had been known to its commitment and dedication in its mandate in serving the people in its area of responsibility.  The troops of 7ID had been very cooperative in giving their utmost service in helping the victims of typhoon Santi and typhoon Yolanda in Tacloban City.” Lt. Gen. Coballes said.
“Foundations have been laid for the Army Transformation Roadmap (ATR); the AFP’s Internal Peace and Security Plan “Bayanihan” is now strongly felt by the Filipino people as we have established and is continually establishing partnership with international, national and local leaders and various stakeholders.  In line with the ATR, the Philippine Army will make a directive requiring every soldier to have their own Individual First Aid Kit (IFAK). This will help our troops especially to those assigned in field units to have an immediate response in the absence of Medical Team. Also, the issuance of new Combat Boots called “Field boots” is expected to be given to each soldier this coming 1st Quarter of the coming year.” Lt. Gen Coballes added.


“This Yuletide Season may we show sympathy to the victims of calamities by making our Christmas Party Celebration simple and meaningful. Let us try to extend help for our people who are need in deeply. Since Christmas is about giving, let’s try to help them not only thru giving material gifts but also including them in our prayers that they may easily build their communities again.”  The Army Chief ended in his remarks.
Posted by Unknown at Monday, December 23, 2013 No comments:

MANILA-Amid the ongoing recovery efforts in areas affected by Typhoon Yolanda, Senator Loren Legarda today urged the survivors to learn from the lessons brought by the disaster and share the same to others to be able to build back better communities and ensure resilient recovery.

In her recent meeting with United Nations Secretary-General Ban Ki-moon, Legarda, UN Champion for Disaster Risk Reduction and Climate Change Adaptation, stressed that communities anticipated and prepared for Yolanda, but the strength of the typhoon and the devastation it caused showed that much more needs to be done.

“Filipinos are a resilient people. Communities, headed by the local government heads, had taken precautionary measures to avert a disaster, but Yolanda showed more of the underlying risks in our communities. Some local government units have early warning systems, but what we must ensure is that all LGUs must put in place such system,” she explained.

The Senator said that the Philippines is ahead of other countries in terms of being DRR-literate especially with the help of two landmark laws—the Philippine Climate Change Act and the National Disaster Risk Reduction and Management Act—both recognized as among the best in the world. These policies, however, still need to be fully operational.

“Some local government units are making good use of these laws. A good example is Former Mayor Al Arquillano of San Franciso, Camotes Island, a UN Sasakawa Awardee. He evacuated residents of a highly vulnerable island ahead of time before Yolanda made landfall, resulting in zero casualties. Other LGUs should be likewise proactive. We cannot achieve full resiliency with piecemeal efforts, with only few communities working towards resilience,” she pointed out.

“We are greatly thankful for the support of the international community, led by the UN. Secretary-General Ban Ki-moon has expressed solidarity with the Filipino people and has called on donor nations to keep their commitment and strengthen their support to the rehabilitation efforts in the affected areas. As a sign of our deep gratitude, it is fitting and is to our best interest that we work hard towards preventing disasters and strengthening resilience,” said Legarda.

“Let us make good use of the lessons we have learned from Yolanda and share this experience with other nations as we hope for a fruitful outcome of two important global events--the UN Climate Summit in 2014 and the World Conference on Disaster Risk Reduction in 2015,” she concluded.
Posted by Unknown at Monday, December 23, 2013 No comments:

TARLAC CITY-President Benigno Aquino III will lead today the formal opening of the 88.85-kilometer Tarlac-Pangasinan-La Union Expressway (TPLEX) via an inaugural drive-trough in its Paniqui exit in Tarlac.
That portion brings to 23 kilometers the total length of the TPLEX that is operational following the opening of the 17-kilometer Phase 1A from Tarlac City to Victoria, Pura, then Gerona initially for free to the public.
At present, diversified conglomerate San Miguel Corporation (SMC) through its subsidiary and TPLEX concessionaire- Private Infra Dev Corporation, Inc. (PIDC) is working on the 27-kilometer stretch from Paniqui to Moncada in Tarlac then Carmen in Pangasinan including the construction of the 950-meter Agno viaduct.
PIDC eyes an April 2014 completion of this section, ahead of its December 2014 estimate.
By then, the two-hour travel time from Tarlac to Carmen will be cut to only 30 minutes.
Moreover, the remaining 25.83-kilometer part from Urdaneta, Pangasinan to Rosario, La Union will be completed by 2015.
From end-to-end, TPLEX will traverse 17 towns and two cities in the provinces of Tarlac, Pangasinan, La Union and Nueva Ecija.
It connects the Northern and Central provinces of Luzon to Metro Manila via the North Luzon and Subic-Clark-Tarlac Expressways.
Originally designed as a two-lane road, SMC decided to upgrade the infrastructure to four lanes to ensure road safety and in anticipation of future traffic growth.
Once completed, it will cut travel time from Tarlac to La Union to only an hour. (Carlo Lorenzo J. Datu)
Posted by Unknown at Monday, December 23, 2013 No comments: