Jinggoy to P’Noy: prosecute media killings in the country 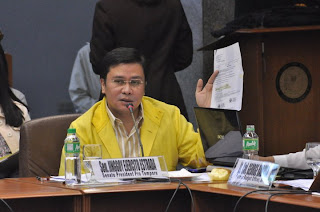 Estrada said that President Aquino personally announced that the government intends to file numerous charges before the end of the year in relation to the uncovered anomalies and graft practices of the past administration. “I personally urge our President to also run after and prosecute personalities behind heinous media killings,” Estrada declared.
A 2010 report by the New York-based Committee to Protect Journalists showing 70 journalists in the Philippines have been murdered since 1992. 93% of these cases were categorized as complete impunity, referring to the status of investigation and meaning no convictions have been obtained. The remaining 7% were categorized with partial justice meaning some but not all of those responsible have been convicted and typically, assassins were convicted but not masterminds.
The report goes on to identify which beats were covered by the victims that is 61% of the victims covered politics, 43% covered corruption stories, and 23% covered crime stories.
Estrada who is the principal author of the measure said that the bill amends Article 248 of the Revised Penal Code to include another attendant circumstance – i.e. when the victim is a member of broadcast or print media – for a crime to qualify as murder.
Currently, murder is a capital offense punishable with reclusion perpetua to death.
The Senate is scheduled to continue plenary deliberations on Senate Bill 455 which classifies killing of media members in the exercise of their duty as a crime of murder.
Estrada explained that the passage of the bill is upholding the constitutionally-guaranteed right to press freedom. This will act, at the very least, as a deterrent against assault to the so-called Fourth Estate. Further, this will empower the media to perform their sworn duties without fear and with utmost responsibility. (Jason de Asis)
Posted by Unknown at Saturday, October 08, 2011 1 comment: 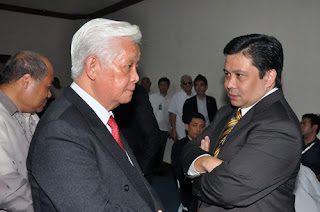 MANILA, October 9, 2011-Senate President Pro Tempore Jinggoy Ejercito Estrada who is also chair of the Senate Committee on Labor, Employment and Human Resources Development and the joint Congressional Oversight Committee on Labor and Employment urged the Department of Labor and Employment (DOLE) to conduct a thorough investigation into the “tragedy” of the Keppel Shipyard at Subic, Zambales where at least six workers were killed and many others were injured after a huge, tons-heavy steel platform in the area collapsed.
Reports revealed that the elevated platform was being used as a bridge by the workers repairing M/V Tombarra, a 22,650-ton container ship, at the drydock of Subic Shipyard and Engineering Inc., an enterprise managed by Singapore's Keppel Shipyard Limited in Barangay Cawag which is part of a special economic zone. Keppel is said to be engaged in ship repair and conversion, shipbuilding and offshore engineering.
Estrada declared that we must leave no stone unturned in examining all the circumstances behind this horrible incident as well as all the factors that might have contributed to it, and in ultimately determining if there was any lapse in the overall ensuring of safety measures in the said workplace.
“Even though there are claims that Keppel has been given high marks in safety checks done by authorities especially the Philippine Economic Zone Authority (PEZA), and that the company is said to be taking full responsibility for the incident and is already investigating this through its safety department,” Estrada said.
Estrada personally made a site inspection on the premises of another shipyard in Subic, Korean shipbuilding firm Hanjin Heavy Industries and Construction (HHIC), after a spate of incidents there that caused the death of several Filipino workers in 2009.
Through the said inspection and the overall scrutiny into the incidents, several lapses in and direct violations of safety measures at the Hanjin shipyard were discovered.
Estrada reiterated his calls on DOLE to conduct its own thorough investigation of the Keppel incident, come up with a detailed report of it at the soonest time possible and ensure that all the victims will be completely attended to.
The senator also expressed his sincere sympathies to the families and loved ones of the affected workers in the said tragedy. (Jason de Asis)
Posted by Unknown at Saturday, October 08, 2011 No comments: