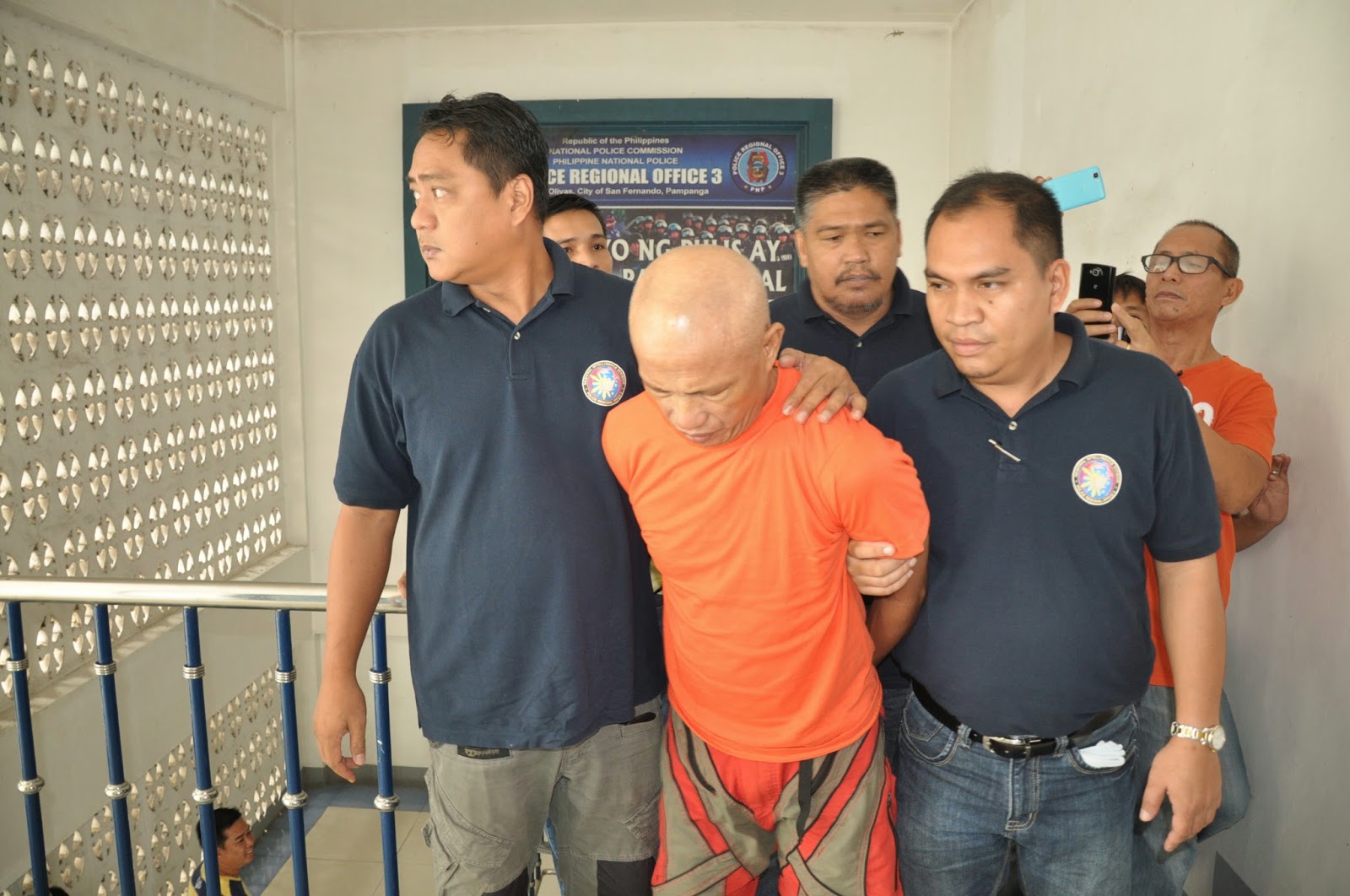 CAMP OLIVAS, San Fernando City, Pampanga- After a month-long surveillance, members of the Intelligence Operations Section, Regional Intelligence Division 3 arrested the Number 1 Most Wanted Person in the province of Zambales and a "big-time" drug pusher today, June 18, 2014 at Brgy Natividad, San Narciso, Zambales.
Based on reports that reached this Office, at around 3:20 in the afternoon of said date, police operation was conducted against the suspect identified as Said ABUBAKAR y Otano. Suspect was seen by police personnel on board his single motorcycle cruising along Zambales National Hi-way, San Narciso, Zambales.
Police personnel chased him and upon reaching Petron Gasoline Station, Brgy Natividad, San Narciso, Zambales flagged him down but suspect tried to elude arrest. However, he was arrested by the operating team.
ABUBAKAR, a native of Marawi City, Lanao Del Sur and a resident of Brgy Burgos, San Antonio,Zambales was arrested by virtue of Warrant for Arrest dated July 16, 2013 issued by Hon Judge Raymond Viray of RTC BR 75 for the crime of Violation of Sections 5, 6, 11 and 12 of RA 9165 with no bail recommended.
Arrested person is temporarily under the custody of the Intelligence Operations Section for documentation pending his turned over to the court of origin.
PCSupt Raul D Petrasanta, PNP Regional Director, PRO3 said that the police in Central Luzon will continue its operations on drug- supply reduction strategy in the coming days to maximize efforts to eradicate the proliferation of illegal drugs in the region.
Posted by Unknown at Wednesday, June 18, 2014 No comments: 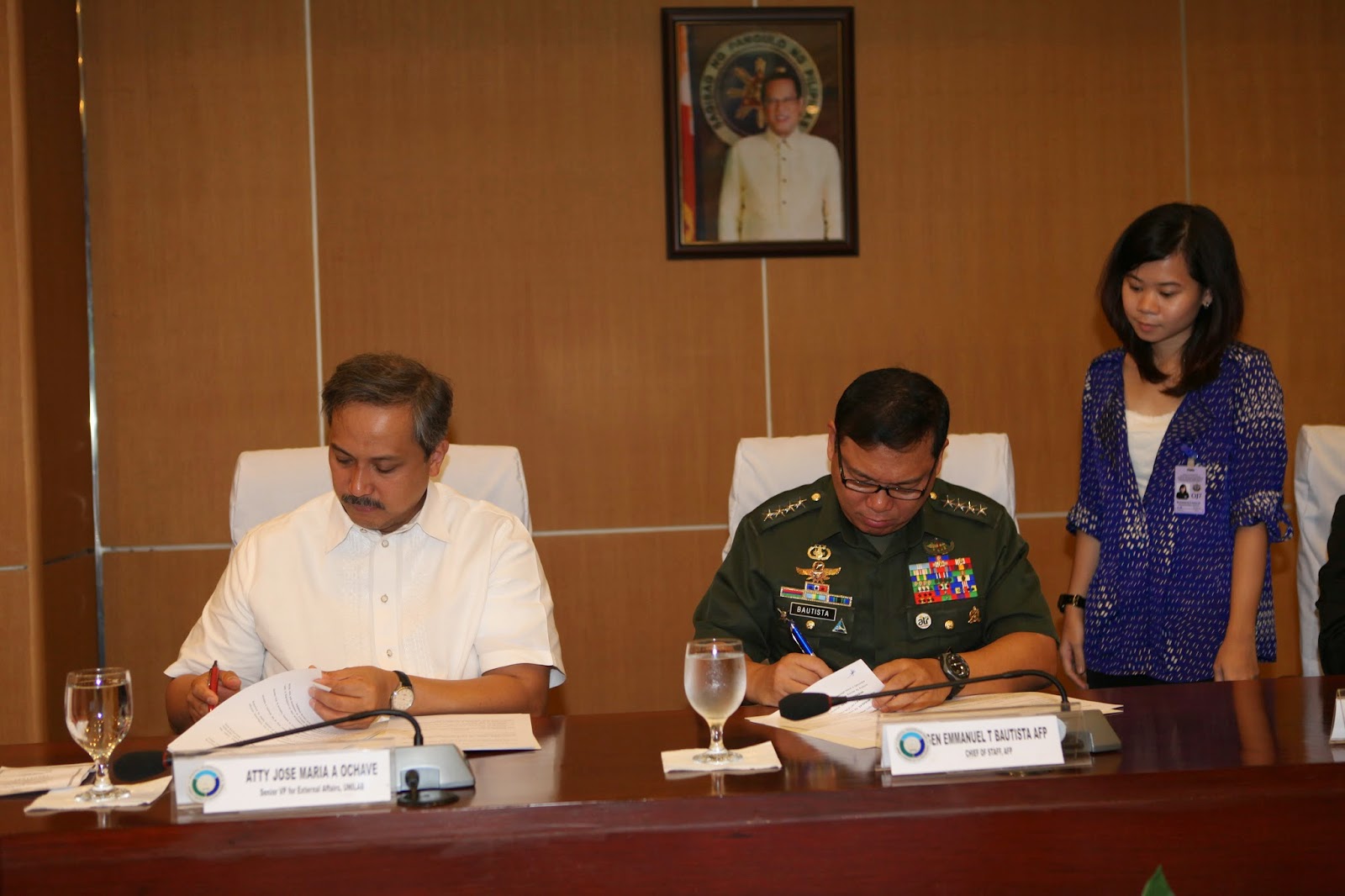 Tzu Chi Foundation is one of the biggest providers of relief and recovery assistance in the areas devastated by super typhoon Yolanda. The said MOU, signed by the AFP Chief of Staff General Emmanuel T Bautista and Tzu Chi Philippines CEO Mr Alfredo T Li, seeks cooperation in providing houses for Yolanda victims.

Accordingly, the AFP will provide soldiers and engineers in preparing the site and in constructing the housing facilities in selected affected areas. The AFP will also provide assistance in coordinating with local government units and other stakeholders to support the construction.

“We thank the AFP for helping us in transporting relief goods from Mactan, Cebu to Ormoc and to Yolanda victims. This time we ask the AFP to help us in the construction of houses for the victims,” Mr Li said.

On the other hand, the MOU with Unilab, Inc. which was signed by its Senior Vice President for External Affairs Atty Jose Maria Ochave and General Bautista, will task the AFP to provide medical personnel, site preparation, and transportation for medical missions in times of calamities.

The two MOU’s will formalize on-going joint projects between the AFP and Tzu Chi, and Unilab as the military has been providing logistical support and manpower in relief operations during disasters.

“We look forward to more undertakings with our new partners. There will be more calamities and disasters that will affect our communities. But we are confident and we are comforted by the fact that we as a people stand united in the spirit of Bayanihan,” Gen Bautista said.
Posted by Unknown at Wednesday, June 18, 2014 No comments:

CABANATUAN CITY, Nueva Ecija – Water level at the Pantabangan Dam yesterday fell below 180 meters, nearing critical level as low water threatens to cut off generation of power in the Luzon Grid operated by the National Grid Corporation of the Philipines.

Engineer Josephine Salazar, operations manager of the Integrated Irrigation Systems which operates the dam said that as of 12 noon yesterday, water level at the dam was at 179.29 meters, down from 179.52 meters Tuesday.

Yesterday’s elevation was just 7.79 meters higher than the critical level of 171.5 meters and just 2.29 meters above the minimum power generation level of the First Gen Corp.  which power plant generates  electricity to NGCP which transmits the same to distribution utilities.

The low water level is expected to affect the cities of Munoz and and the towns of Guimba, Licab, Quezon  and Talavera and Victoria, Tarlac.

Salazar said they expect the water level to go down to 177 up to the end of this month.

“Based on our projection, it will hit 177 meters. But by the first week of July, we will meet the irrigation requirements so we will again close the intake gate,” she said, adding they see no problem when it comes to irrigation but the problem will come in the area of power generation.

Salazar added that they are planning to undertake cloud-seeding operations in the affected areas.

For over a month, UPRIIS cut off irrigation supply to some 100,000 hectares of agricultural lands in and resumed releasing water to its service areas beginning May 30 at the onset of the wet cropping season. UPRIIS has programmed for irrigation 114,026 hectares for the twin cropping seasons, up by 2,772 hectares from last year’s 111, 254 hectares.

Cristino Castillo, chief of  the UPRIIS’ dam and reservoir division, said that they released water at a rate of 80 cubic meters per second, up from 60 cms at the start of this month.

MANILA-Senate President Franklin M. Drilon expressed confidence that the lifting of the cap on foreign ownership of banks will attract more investments, perk up the banking sector and ultimately, boost the economy.

The Congress, shortly before its First Regular Session adjourned, approved a measure amending Republic Act No. 7721, otherwise known as an Act Liberalizing the Entry and Scope of Operations of Foreign Banks in the Philippines, to allow the full entry of foreign banks in the country. The bill will be sent immediately to the Office of the President for approval, said Drilon.

“The immediate enactment of this measure will be a big boost to the administration’s emerging economic policy which is to open up the economy to direct foreign investments,” emphasized Drilon.

“If we really want to lure investors to come in, we have to amend the policies that block foreign investments, while we address the biggest investment turnoff which is corruption,” said Drilon.

Once the measure is enacted into law, Drilon explained that established and reputable foreign investors will be allowed to have full ownership of domestic banks in the country.

By doing so, Drilon said that he expects a significant increase in the flow of direct foreign investments which in return, will improve our financial and economic portfolio.

“I am confident that President Aquino will approve this measure for the benefit of our economy and our people. The additional resources to be generated from the measure can be tapped to fund social services and infrastructure projects much needed by our Filipinos,” he added.

Under the bill, all the privileges currently being granted to domestic banks will also be extended to locally incorporated subsidiaries of foreign banks.

The Senate leader concluded that the measure will align our country’s banking system with the forthcoming implementation of the ASEAN banking integration framework, which aims to facilitate infusion of foreign investment into various ASEAN communities.
Posted by Unknown at Wednesday, June 18, 2014 No comments:

MANILA-Senate President Franklin M. Drilon today lauded the swift approval and signing by President Aquino into law of Republic Act No. 10638 which extended the corporate life of Philippine National Railways (PNR) for another 50 years. RA 10638 was signed on June 16.“I laud the President for acting promptly on this very important legislation which the Congress vigorously pursued despite the issues confronting some of its members with regard to the pork barrel scam controversy,” said Drilon. RA 10638 was among the 19 measures passed by Senate during the First Regular Session.“Kung mapuputol ang serbisyo ng PNR dahil na-expire na ang charter nito ngayong Hunyo, ang laking perwisyo ang maidudulot nito sa publiko, sa mga biyahero,” he emphasized.The Senate leader said the speedy approval shows that the government acknowledges that rail transit systems still play an “undeniably crucial role in the everyday lives of our citizens.”“Any stoppage of the rail service will be of huge inconvenience for our commuting public, especially for our countrymen who hail from provinces and have to travel to Metro Manila on a daily basis,” said Drilon.“It is important then for the government to ensure that the PNR continues to be a convenient, dependable and time-saving transit system for our people,” he added. Drilon, however, hopes that a sound and feasible modernization plan for Philippine railways will soon be legislated and prioritized by the government, saying that the rail service, once it is improved, will make a cheaper alternative mode of transportation which could aid in the decongestion of traffic in Metro Manila.Meanwhile, Drilon said that he expects more proposed legislation to become law in the coming days such as the Picture-Based Health Warning Act, the amendment to Republic Act No. 7721 or the Act Liberalizing the Entry and Scope of Operations of Foreign Banks in the Philippines, the Philippine Lemon Law, the Free Mobile Alerts Act, and the Act Promoting the Reduction of Poverty Through the Development of Micro, Small and Medium Enterprises, among others.
Posted by Unknown at Wednesday, June 18, 2014 No comments:

MANILA-Senator Loren Legarda today urged Filipinos to keep voting for Vigan City to make it one of the New7Wonders Cities of the world.

Legarda said that Vigan City deserves to be included in the New7Wonders Cities not only to bring honor to the country but also to set a good example to other cities on how history and culture can stand out amidst modernity.

“The carefully preserved centuries-old structures in the Historic City of Vigan bring people back in time, but the city’s prosperity tells us that the citizens and the government of this UNESCO World Heritage Site have worked well and made good use of its autonomy,” she said.

She added that Vigan is the only UNESCO heritage city in the Philippines and was awarded the Best Practice for World Heritage Site Management by UNESCO in November 2012.

“The best practices that the people of Vigan have carried out to preserve history and promote culture while working towards sustainable development should be emulated and recognized. I call on Filipinos to support Vigan City’s bid to be one of the New7Wonders Cities,” Legarda stressed.

Vigan City is among the 28 finalists and there are three qualifying phases that it must go through before being named one of the New7Wonders Cities.

Voting can be done online through the website: www.new7wonders.com/en/cities.
Posted by Unknown at Wednesday, June 18, 2014 No comments: