PALAYAN CITY, Nueva Ecija, September 1, 2012-Local officials commemorate today the 116th anniversary of the “Unang Sigaw ng Nueva Ecija” in three different venues even as the debate continues to rage on where should be the center of this year’s celebration of the historic event which put the province in the annals of history as one of only eight provinces which revolted against the Spaniards.
In this provincial capital, Capitol officials led by Gov. Aurelio Umali and Vice Gov. Jose Gay Padiernos will usher the celebration ast the convention center.
Separate rites have been laid down in the towns of San Isidro and Cabiao which both played a central role in the revolution.

In Cabiao, local officials have insisted that the center of celebrations for the annual  event should be in this town, not in the provincial capital Palayan City.
Mayor Gloria Crespo-Congco said organizers should give justice to the heroism of Gen. Mariano Llanera by considering Cabiao as the center of celebrations, instead of Palayan.     “Cabiao should really be the center of the celebrations because General Llanera was from here,” Congco said, adding that the great revolutionary leader hailed from Barangay San Roque.
The event marks the day when Llanera led home-grown revolutionaries in assaulting the Spanish garrison in San Isidro and freed hundreds of Katipuneros on September 2,1896. For its role in the revolution, the province earned its place in the Philippine flag as one of the eight rays of the sun, each ray representing the provinces that revolted against the Spaniards.
Congco said she had nothing against holding festivities in other towns to commemorate the event for Novo Ecijanos to appreciate history but said Cabiao’s role should be given utmost importance.
The 66-year-old head of the marching band that stormed the Spanish garrison in nearby San Isidro town also said Cabiao should be given recognition as the sole venue for the anniversary rites.
Raul Nogoy, Banda, ’96 leader said the National Historical Commission of the (NHCP) should set the record straight on the revolution. He said (then known as Factoria) can not be considered as the center of the celebrations neither because this was where the Spaniards held fort.
“Don nagkuta ang mga kaaway so bakit doon (It was there where the enemy sought refuge so why hold it there),” he said.
The holding of the celebrations in Palayan has also come under fire from historians who said Novo Ecijanos seem to have lost their sense of history.
Noted historian Jose Hipolito Jr., the municipal planning and development coordinator, said Llanera and his fellow “coup plotters” met in the house of the Romeros here where they plotted the revolt. He said the Romeros were the ancestors of Umali.
Former municipal engineer Dante dela Cruz said since he was a kid, Cabiao has been commemorating the event yearly, unlike which started observing the event only recently. He said Cabiao always plays a significant role in revolutions, citing the Hukbalahaps (Hukbo ng Bayan laban sa Hapon), one of whose leaders, Jesus Lava, was from Barangay Sinipit.
Local historical accounts said that when the Spaniards first laid siege in , remnants of the forces of Rajah Sulayman sought refuge in this town. (Manny Galvez)

Posted by Unknown at Saturday, September 01, 2012 No comments: 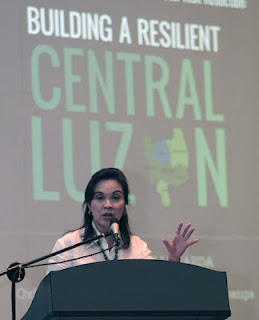 MANILA, September 1, 2012-In the aftermath of the 7.7-magnitude earthquake that shook Guiuan, Eastern Samar and prompted tsunami alerts for six provinces in the Philippines and at least four other countries, Senator Loren Legarda today renewed her call for greater vigilance through stronger earthquake preparedness efforts.

The Senator said that after the provinces in Visayas and Mindanao experienced the strong earthquake, residents of Luzon, particularly in Metro Manila, should prepare for such strong temblor too, noting the findings in the 2004 Metro Manila Earthquake Impact Reduction Study (MMEIRS).

“The MMEIRS revealed high casualties and massive destruction should a 7.2-magnitude earthquake hit Metro Manila. The study also contains priority actions that should have been undertaken 3-6 years after the study was publicized to reduce the impacts of such a strong tremor,” she pointed out.

Based on the MMEIRS, a 7.2-magnitude earthquake in Metro Manila would cause the destruction of 40% of the residential buildings, damage 35% of all public buildings, kill 34,000 people, injure 114,000 individuals, and the ensuing fires will also result in 18,000 additional fatalities.

Legarda explained that among the priority steps that must be undertaken include the promotion of disaster-resilient urban development; ensuring the structural integrity of buildings and critical infrastructure; formulating emergency supply system of water, food and other necessities; and determining open spaces for safe refuge when tremors occur.

“We must also ensure that there are back-up systems of vital utilities such as electricity and telecommunications equipment, which are necessary for post-disaster efforts,” she said.

She also stated that local authorities and community leaders must enable citizens to respond quickly to earthquakes by giving them knowledge of what to do before, during, and after such disasters, and that every barangay must craft an evacuation plan and conduct regular evacuation drills that would help citizens find out the fastest and safest way to reach open spaces and other safe areas.

“Disaster prevention is a tall order, but it is one well worth the investment. We must prepare ourselves for more frequent natural hazards, keeping in mind that it is only through effective preventive measures that we can save lives,” Legarda concluded.
Posted by Unknown at Saturday, September 01, 2012 No comments: 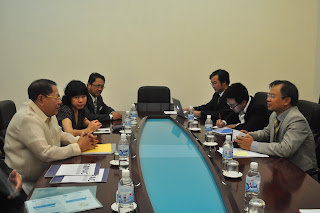 Hanoi, Vietnam, September 1, 2012-Senator Edgardo J. Angara underscored that the 5th Global Conference of the Global Organization of Parliamentarians Against Corruption (GOPAC) will showcase the gains being made against corruption throughout the ASEAN region, including the Philippines.

Angara made the remarks during a meeting with Hon. Ngyuen Manh Tien, Vice Chairman of Foreign Affairs of the National Assembly of Vietnam and Head of the Philippine-Vietnam Parliamentary Friendship League.

"I congratulate Vietnam for being one of the first countries in Asia to have a legal framework against corruption as early as 2005, and now having a long-term plan against corruption until 2020. This is a remarkable feat within our neighborhood," said Angara, who heads the 5th Global Conference Conference Steering Committee.

"This is the reason SEAPAC [Southeast Asian Parliamentarians Against Corruption] is hosting the Global Conference in January this 2013. Because we want to show the whole world, especially the developed world, how we, the Philippines, Vietnam and the rest of Asia, are making strides in fighting corruption in our backyard. We hope you could join us actively through your support and participation," he continued.

The upcoming GOPAC Conference will be held in Manila from January 30 to February 2, 2013. With the theme, "Good laws. Good leaders. Good Citizens," the Conference is expected to draw about 350 to 400 parliamentarians from 90 member countries as well as world-renowned leaders, heads of states, members of the civil society, cabinet members, members of the judiciary and the academe.

The event, considered as one of the largest and most important anti-corruption events in the world, will be held in Manila in recognition and support of the recent efforts of the Philippines and neighboring ASEAN countries against corruption.

"We support efforts in transparency and anti-corruption, and thus fully support the Conference in Manila hosted by the Philippines," responded Assemblyman Tien. "We will bring this up to the National Assembly, and I am confident that it will go through smoothly so we can bring many members of the assembly to the Conference."

The 13th National Assembly of the Socialist Republic of Vietnam is the highest governing body of Vietnam, a unicameral body composed of 498 elected officials serving until 2016.

Angara is the driving force behind the establishment of SEAPAC, which leads regional anti-corruption efforts on a coordinated and institutional basis through parliamentarian-members in Cambodia, Indonesia, Malaysia, Singapore, Thailand, Vietnam and the Philippines.

He is currently touring the region to drum up support for the upcoming Manila Conference in 2013.
Posted by Unknown at Saturday, September 01, 2012 No comments: