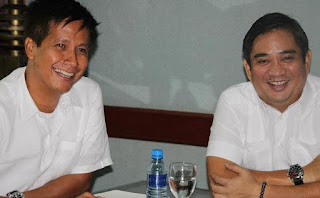 PALAYAN CITY, Nueva Ecija, November 21, 2011-Ecija Vice Governor Jose Gay Padiernos assured that the provincial government’s proposed P1.8-billion budget for 2012 will be passed before the end of the year, saying that it is now in the thick of deliberations.

“We are now consulting with the various chiefs of officers. We expect the deliberations to be finished by December,” Padiernos said, allaying fears for the second year in a row that the province would be operating on a re-enacted budget like in 2007, 2008, 2009 and 2010.
Padiernos said that the budget impasse that marred the province over the last four years leading to this year is now a thing of the past because of the “unified leadership” at the Capitol.
This after Governor Aurelio Umali submitted a 2012 budget of P1,857,319,103 as he underlined the priorities of his administration, including turning Nueva Ecija – the country’s titular rice granary - into an “agro-industrialized province.”
Umali said in his budget message to the SP that the proposed budget was crafted taking into consideration its primary thrust of transforming Nueva Ecija into a sustainable and progressive agro-industrialized province.
He said with the budget, he expects the provincial government to uplift the economic and social conditions of Novo Ecijanos anchored on an eight-point objective among which are improvement of agricultural productivity, provision of jobs and livelihood; provision of quality education, social welfare, nutrition and related social services; rehabilitation of typhoon-affected areas, infrastructure development, enhancement of revenue-generating measures and promotion of public-private partnerships in development.
The proposed appropriations, which are four percent bigger than last year’s budget, had proposed P691.9 million for personnel services representing 37 percent of the budget, P368.2 million (19.8 percent) for maintenance and other operating expenditures, P279.8 million (15 percent) for capital outlay.
Board Member Joseph Ortiz, chairman of the SP’s committee on appropriations, said one of the salient features of this year’s budget is the allocation of P265.8 million for the Annual Investment Plan covering economic and social services, general services, health, housing and community development.
The provincial government is expecting to raise internal and external revenues, including P1.35 billion allotment shares and sources from the share of national wealth, grants and donations, sale of assets and share from the Philippine Amusement and Gaming Corp. and the Philippine Charity Sweepstakes Office. (Jason de Asis)
Posted by Unknown at Monday, November 21, 2011 No comments: