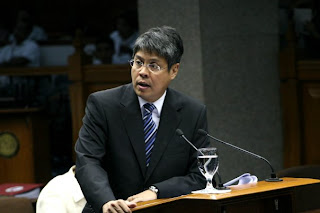 MANILA, November 22, 2012-Senator Francis "Kiko" Pangilinan today urges the Philippine National Police to ensure the safety and protection of kin Maguindanao Massacre victims who have been reportedly receiving threats from anonymous entities. Pangilinan also urges the Judiciary to speed up the wheels of justice in the case, which has yet to achieve more breakthroughs since Ampatuan Sr., his son, former Datu Unsay Mayor Andal Ampatuan Jr., his other son, Zaldy Ampatuan, the former governor of the Autonomous Region in Muslim Mindanao were implicated and jailed for the massacre.

"The Maguindanao Massacre case will be the benchmark of how far our justice system has progressed from previous administrations, whether we like it or not. It is then extremely urgent that we exert all efforts to resolve this case as swiftly as possible."

The massacre of 58 people three years ago, most of which are journalists, is said to be the worst political violence that took place in the Philippines in recent history.

"That act was so brazen and so dastardly—it is horrifying to think that anyone is capable of doing this, and yet it happened,” pangilinan points out. “We must not allow this massacre be trivialized and buried in the annals of our history by the slow grind of our wheels of justice."

“It isn’t only the Ampatuans and their co-accused that are on trial here, but the entire system of justice. The failure to render a timely and just judgement is an indictment on the capacity of the nation to serve justice.”
Posted by Unknown at Thursday, November 22, 2012 No comments:

MANILA, November 22, 2012-Senator Loren Legarda today expressed concern over the reported failure of ASEAN to once again come up with a united stand on how to handle the territorial disputes between China and four of its members – Brunei, Malaysia, the Philippines and Vietnam.

“We recognize that ASEAN unity is vital in addressing the challenges facing the region today, but certainly not at the expense of compromising our national interest. ASEAN unity and the promotion of each member’s national interest are complementary goals that cannot be pursued in isolation of the other,” she said.

The Senator reacted in the context of a reported statement by the Chair of the 21st ASEAN Summit that ASEAN leaders had agreed not to “internationalize” the disputes and would confine negotiations to those between the bloc and China.

Legarda, Chair of the Senate Committee on Foreign Relations, thus supported President Aquino’s move to register its objection to the Chair’s view that “a consensus on putting the discussions within an ASEAN-China framework had been reached.”

“I welcome President Aquino’s unfettered resolve to remind his fellow leaders to achieve unity in ASEAN’s stand and approach in handling disputes with China over conflicting claims to the strategically vital West Philippine Sea. I support the President’s call for constructive dialogue and for a reaffirmation of respect for international law, particularly the United Nations Convention on the Law of the Sea (UNCLOS) in resolving the disputes,” she remarked.

The Senator said that the Leaders of ASEAN, in April 2012, adopted the “Phnom Penh Declaration on ASEAN: One Community, One Destiny”, underscoring, among others, the commitment of ASEAN members to uphold the collective commitments reflected in the Declaration on the Conduct of Parties in the South China Sea (DOC) and the universally recognized principles of international law, including the 1982 UNCLOS, and to move for the eventual realization of a regional code of conduct (COC).

“ASEAN needs to be consistent with its declarations.  Clearly, UNCLOS was not considered in isolation of the proposed solutions under this Declaration. I do note that the Leaders have decided to seek early talks with China on a regional code of conduct.  It would be interesting to find out if they have, at least, agreed on an ASEAN position on its key elements and features before they initiate discussions with China,” she said.

“Maritime security and cooperation in ensuring freedom of navigation, in combating piracy, and in maintaining peace and stability in the region must be strengthened. ASEAN is in a unique and critical position to help preserve peace in the region by effectively shepherding the process of producing a binding Code of Conduct in the South China Sea,” Legarda concluded.
Posted by Unknown at Thursday, November 22, 2012 No comments: