Laguna solon Chipeco calls if Reyes be buried at the Libingan ng mga Bayani, why not the late President Marcos 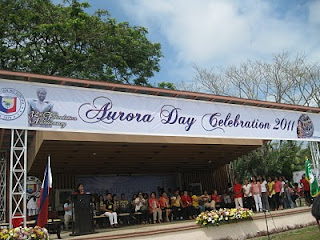 BALER, Aurora, February 20, 2011-Laguna 2nd district Rep. Timmy Chipeco calls that if a former chief of staff of the Armed Forces of the Phailippines (AFP) can be buried at the Libingan ng mga Bayani, then “why not a former President who was a former soldier and a war hero,” as he joined calls to have former President Ferdinand Marcos to be buried at the Libingan ng mga Bayani.
Chipeco, who was among the guests yesterday in the 32nd foundation anniversary of the province along with Technical Education and Skills Development Authority director general Joel Villanueva together with Laguna 1st district Rep. Dan Fernandez, said that he sees no point in having a former defense secretary being buried at the Libingan when a former president could not be. He was apparently referring to the late former Defense Secretary Angelo Reyes who was buried at the Libingan after committing suicide over corruption allegations.
Chipeco said that Marcos should have been buried at the Libingan ng mga Bayani a long time ago, adding that if that has been done a long time ago, then there’s nothing to talk about.
Fernandez said it’s high time to bury the ghosts of the past by allowing Marcos to be buried at the Libingan. “After all, he has also done great achievements for the country. It’s not all bad. There is something in him that we can consider good also,” he said.
The two lawmakers were commenting on the appeal of Marcos’ son Sen. Ferdinand Marcos Jr. to President Aquino to grant his father and namesake a state burial to take away yet another issue that divides the nation.
He explained that his father deserves a state burial by virtue of his services as a soldier during the Second World War, being a former commander-in-chief and twice elected president. (Jason de Asis)
Posted by Unknown at Sunday, February 20, 2011 No comments:

MALOLOS CITY, Bulacan, February 20, 2011-In a recent observance of Leprosy Prevention of Leprosy Prevention and Control week last February 14 to 18, the Bulacan provincial government pledged support to the Department of Health’s (DOH) campaign which aimed for Leprosy-Free Philippines.
Bulacan Governor Wilhelmino M. Sy-Alvarado has ordered a wider information dissemination campaign to inform the Bulakenyos of the disease’s symptoms, prevention and treatment where the Provincial Public Health Office (PPHO) recorded that there are 13 Persons afflicted with Leprosy (PWL) at present and are undergoing medications.
The Leprosy which is known as Hansen's disease is a chronic, mildly communicable disease caused by infection from “mycobacterium leprae”, a rod-shaped, acid-fast bacillus which primarily affects the skin, the mucous membranes, especially those in the nose and the peripheral nervous system, adding that the mode of transmission of the disease is airborne, where a person can inhale droplets or spray from coughing and sneezing of untreated cases.
The signs and symptoms of a persons with Leprosy (PWL) has a long standing skin lesions that do not disappear with ordinary treatment, loss of feeling or numbness on the skin, loss of sweating and hair growth over the skin lesions, and thickened and painful nerves in the neck, forearm, near elbow joint, and the back of knees.
DOH said that once diagnosed early, the patients are put under treatment with Multiple Drug Therapy (MDT) have big chance of healing and leprosy bacilli-causing disease maybe controlled through treatment of all leprosy cases to prevent spread of infection, practice of personal hygiene and healthful living, clean environment, enough rest and exercise and avoid contact with PWL, among others, saying that leprosy should not be taken lightly because it creates a high physical and social toll, resulting to deformity and disability of the patient if left untreated. (Jason de Asis)
Posted by Unknown at Sunday, February 20, 2011 No comments: 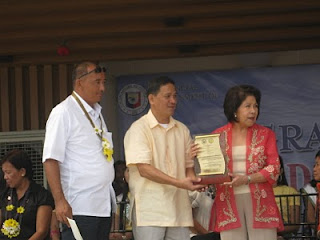 BALER, Aurora, February 20, 2011-Aurora Governor Bellaflor Angara-Castillo lauded all the leaders of the entire province for their continuous efforts in supporting the provincial government where she said that Aurora now are continuing to become bigger as its economic uprise grows rapidly, adding that Aurora has received various awards in the country.
Angara-Castillo, who received the outstanding governor of the Philippines and the most child friendly public servant of the 1st NCCT DepEd Lingkod TV Awards under the executive category, said that the people of Aurora are her inspiration in doing great achievements together with Senator Edgardo J. Angara who also received the same award under the legislative category, while Congressman Juan Edgardo “Sonny” Angara garnered One of the Ten (10) outstanding Young Men “TOYM” of the Philippines, citing also the best Aurora provincial tourism officer of the year gained by Mr. Michael Palispis.
In an exclusive interview with Angara-Castillo, the province is now ready for global competitiveness as it became the top 10 priority province to promote overseas by the Department of Tourism because of its haven beaches and one of the country’s surfing destiny where tourists visited the place. “Ang promotion sa Aurora ay hindi lang local kundi global competitiveness,” she said, however she pointed out that she don’t want Aurora to be like Boracay.
“What I like is to preserve the province for having the biggest forest in the country promoting nature, environment and expound networking of Aurora tourism and agriculture as the fundamentals of development,” Angara-Castillo said, adding that Aurora has an economically well develop agriculture technology in the entire province.
She said that Aurora tourism industry boomed 300 percent last year, saying that there are numerous businessmen who would like to put up hotels in Aurora but she said that she would like to limit the building structure for five (5) floors only and not like Boraciay with towering hotels and establishments in different heights which give the impression of disorderliness and irregularities. (Jason de Asis)
Posted by Unknown at Sunday, February 20, 2011 No comments: