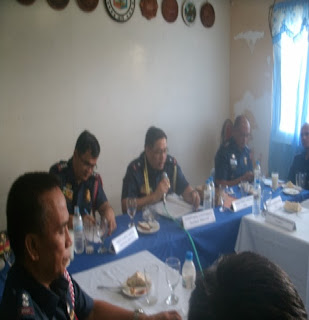 BALER, Aurora-Police Chief Supt. Raul D. Petrasanta, Regional Director of Police Regional Office 3 (PRO3) has been keeping on his toes and has been conducting series of command visits at the different provincial/city police offices here in Central Luzon.

A short program was conducted wherein he spearheaded the distribution of eleven (11) brand new Glock 17 9mm pistols to the personnel of Baler Municipal Police Station. He said that the continuous distribution of the new guns is part of the modernization program of the PNP which aims at attaining a 1:1 police-to-pistol-ratio.

Petrasanta gave his guidance to the officers and personnel of Aurora PPO where he emphasized his administration’s program under the directives of the Chief PNP, Police Director General Alan Purisima.
Prior to his visit in Aurora Provincial Police Office, he also visited Bulacan, Nueva Ecija, Pampanga, Tarlac and Zambales Provincial Police Offices last month.

Petrasanta is scheduled to visit Angeles and Olongapo City Police Offices in the coming days. (CLMA News)
Posted by Unknown at Wednesday, November 13, 2013 No comments: