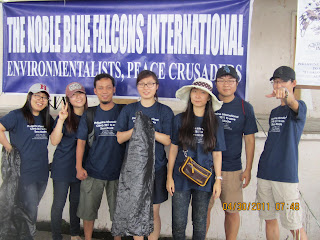 DINGALAN, Aurora, May 4, 2011-An estimated to 147,908 pesos of illegally cut yakal lumbers were seized by the Army and the Noble Blue Falcons Environmental Mountaineers at Brgy. Tanauan in this town last April 23, 2011 around 11 in the evening led by Cpt. Noel B. Wamil, Commanding Officer of Charlie Company, 56 Infantry Batallion, 7th Infantry Division and Ericson C. Dayson of NBFI Environmental Environmental Mountaineers in the continuing implementation of total log ban in the country.
The task force sagip kalikasan intercepted an Izusu XLT type jeep with plate no. ZLV 705 where totalled to 1, 488.9 Yakal and Lawaan lumbers on board. 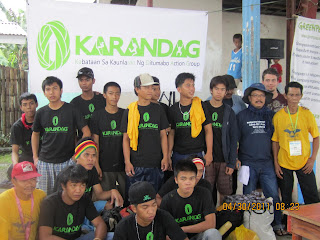 Prof. Leonardo "Onad" Usita, National President of the Noble Blue Falcons Environmental Mountaineers said that the success of the operation was due to the advance information relayed to the apprehending team of the Army and the group of Blue Falcons Environmental Intelligence agents as part of Advance Reconnaissance Team who conducted clearing in the recent Philippine International Climb 2001 to Save Sierra  at Mt. Falcon, Ditumabo, San Luis town for the 300 American, French, South Korean mountaineers, and the with Filipino Climbers to save Aurora Sierra Madre campaigning against the rampant logging in the province.
“A violation of PD 705 as amended by E.O. 277 and transport of forest products without permit to transport are the charges filed to the violators,” Usita said, lamenting that the incident did not appear  in the local and national news papers  in what seemed to be a conspiracy between media and illegal loggers in the province of Aurora. 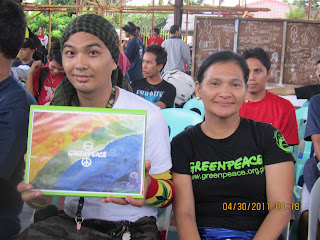 “We know that media people in Aurora are true to the idealism of media practice although we received reports that few reporters are allegedly receiving bribes to loggers to tone down if not impose a media black-out in the province,” Usita said, adding that their environmental Intelligence agents will unmask this corrupt media people so as not to allow them to contaminate the many honest ones. (Jason de Asis)
Posted by Unknown at Tuesday, May 03, 2011 No comments: