Lyceans conducted search for Mr. and Ms. NSTP of the year 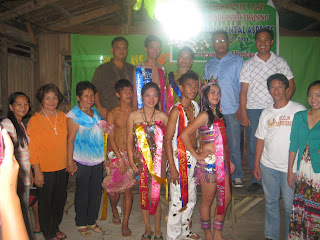 BALER, Aurora, October 16, 2011-Lyceum of the East students conducted search for mister and miss national service training program (NSTP) of the year led by NSTP President Apple Joy Abando at dela Torre Beach Resort, Brgy. Zabali.
The said event is the first in all existing colleges and universities in Aurora where the Lyceum of the East took the courage to conduct the same under the NSTP subject.
Mr. Glen Padegdeg, Chief Operating Officer and Mr. James Frances Gose, Vice President of the school said that the students proposed the project in coordination with their NSTP coordinator. The duo lauded the leadership of NSTP lyceans.
Ms. Linda Esteban, school administrator said that most institutions of higher learning, the academe is their major concern and not so much of personality development. Lycean students parade on the stage to exhibit their charisma, beauty, poise and bearing towards the end of attaining personality development.
“We conducted this activity in order to have a colorful and significant end of the semester,” Abando said. “I am sure that each one of us, particularly my fellow students are happy, and very proud to be members of the Lyceum of the East family,” she added.
Each candidate showed their creative attires which was made of recycled materials, casual wear, beach attire and talent.
Students who were awarded best in casual attire were Mr. Jimson Aquino and Ms. Joana Ibay, best in beach attire were Jimson and Ms. Josephine Ola, best in talent were Mr. Ronnie Balbuena and Ms. Samantha Angala and best in creative attire were Jimson and Joana.
Among the rest,  Mr. Jefferson Bihasa and Ms. Joanna Ibay hit the 2nd runner-up, Mr. Ronnie Balbuena and Ms. Josephine Ola were awarded 1st runner up and Mr. Jimson Aquino and Ms. Samantha Angala won the coveted title Mr. and Ms. NSTP of the year. (Jason de Asis)
Posted by Unknown at Sunday, October 16, 2011 No comments: 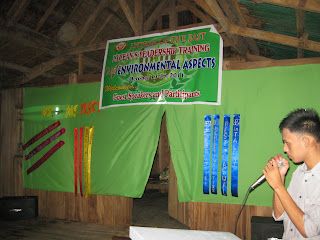 BALER, Aurora, October 16, 2011-The Lyceum of the East in coordination with the 48th Infantry “Guardians” Battalion, Philippine Army conducted a 3 day leadership seminar with environment aspects at dela Torre beach resort, Brgy. Zabali.
The first day of the activity was the search for Mr. and Ms. National Service Training Program (NSTP). All the students participated until midnight.
The following day, Ltc Kurt decapia, battalion commander of the 48th IB discussed the leadership skills and characteristics of a true leader where the student participants analyzed the different traits of a leader in managing their constituents and/of the country.
Ms. Erlinda Esteban, School administrator also discussed how to develop self confidence and knowing onself as a leader.
Mr. Mark Tubay also shared the relevance of spiritual discipline to leadership.
On the third day, a joint effort with the soldiers of 48th IB together with the faculty, staff and students of Lyceum conducted mountain climbing and tree planting at the mountainous portion before Pag-asa, Sitio Digisit, Brgy. Zabali.
After that they conducted rapelling, slide for life and other obstacle course including team building where the students shared their unforgettable experience during and after the events.
Airachelle Valino said that they learned decision making, unity, camaraderie, physical and spiritual development, not withstanding hurdling obstacle courses which manifested being courageous.
1lt Rodulfo Cordero, civil military operation chief said that the army battalion is always willing to help Lyceans in every endeavor for the development of the students.
Ms. Apple Joy Abando, NSTP president said that the success of the seminar is a collaborative effort of each and everyone who entrust their college education to the Lyceum of the East, the ever-high spirited officers and members of the administration and the 48th IB.
Under NSTP, all freshmen students enrolled in baccalaureate degree are required to complete one (1) NSTP component of their choice as a graduation requirement.
The major objective is to be able to internalize virtues of foundation of leadership, and how it applies on an individual, team, and institutional level vis-à-vis national development in the context of self-awareness and values integration and promotion framework for understanding human nature. (Jason de Asis)
Posted by Unknown at Sunday, October 16, 2011 2 comments: