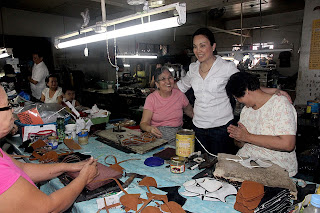 MANILA, March 6, 2013-Senator Loren Legarda has called for greater promotion of the shoe industry in Marikina City, stressing that funding and technological support should be provided to give the industry the needed boost.

Legarda, great grand niece of Kapitan Moy Guevarra who started the shoe industry in Marikina, made the statement after her recent visit to Marikina City, known as the Shoe Capital of the Philippines.

“The shoes made in Marikina are of good quality but the lack of support, especially by way of patronizing and marketing the products, has decreased the demand for these locally-made footwear,” she said.

According to the Philippine Footwear Federation Inc. (PFFI), there are now only 130 shoe factories in Marikina, which is a sharp decline from the 7,000 factories operational in the 1970s.

“We need to have programs that would revive the industry. Support from both the national and local government is needed. We can invite more Filipinos and foreigners to visit the shoe museum in Marikina and have regular trade fairs to showcase their products,” she explained.

Legarda also said that shoe manufacturers in Marikina can make use of the Magna Carta for Micro, Small and Medium Enterprises (MSME) for funding support.

The MSME Law, which Legarda principally authored and sponsored, provides further assistance to entrepreneurs by requiring lending institutions to allocate at least eight percent (8%), an increase from the previous six percent (6%), of their total loan portfolio to micro and small businesses. It also provides access to new technologies and regular entrepreneurship training programs for workers as well as a comprehensive development plan that would ensure the viability and growth of MSMEs in the country.

“We might also need to review the Footwear, Leather Goods and Tannery Industries Development Act. We need to know if the law is being implemented properly and if there is a need to propose amendments to it,” the Senator said.

“Globalization and the competition in the market are some of the factors that have resulted in the dwindling demand of Filipino-made products, like shoes. We have to do something to boost our local industries, such as shoe-making and weaving, where many Filipinos are also good at. We can start by patronizing locally-made products. Marikina-made shoes are pretty, comfortable and reasonably-priced. Let us buy Pinoy,” Legarda concluded.
Posted by Unknown at Wednesday, March 06, 2013 No comments:

“This could only mean that Filipinos are more optimistic than ever that their lives will change for the better under President Aquino’s administration,” Madrigal said.

The SWS poll, conducted from Dec. 8 to 11 last year, found 37 percent of respondents expecting their lives to improve in 2013 against eight percent who said things would get worse, for a net score of 29, up by two points from August last year. The SWS said net personal optimism “has been “high” to “very high” since September 2009.

“The survey reflects our people’s overwhelming sentiment which they had earlier expressed in another SWS survey showing their preference for Team PNoy’s senatorial slate over that of the opposition,” Madrigal said.

Nine Team PNoy senatorial bets handpicked by President Aquino made it to the winning circle against UNA’s three in the SWS-BusinessWorld’s latest survey released last month.

More than three million families with more than six million children are currently benefiting from the program. A total of 3,742 households in the provinces of Lanao del Norte, Mountain province, Negros Occidental and Occidental Mindoro took part in the SWS survey.

From these families, 1,418 households eligible for the 4Ps were assessed in greater detail and provided the data on which the assessment was based.

The same survey showed that 33 percent of Filipinos expect the economy to get better this year compared to 14 percent who expressed a contrary view. The net economic optimism was 19 percent in December, also two points higher.

“One thing is clear. Our people are tired of old-style politics, tired of empty promises as what the opposition is offering. They want programs that would redound to their benefits,” Madrigal said.

The SWS poll also said that “net economic optimism ‘has been very high’ from 10 percent and above in eight out 11 surveys since June 2010.
It added that the number of Filipinos who claimed their lives had improved in the last 12 months rose to 25 percent from 21 percent.

“Our people will choose in May the Team PNoy candidates who can help the President continue with his reforms and economic agenda. The choice for them is clear. No amount of ‘Gangnam’ style dancing in rallies by old-style politicians can change that,” Madrigal said.
Posted by Unknown at Wednesday, March 06, 2013 No comments: