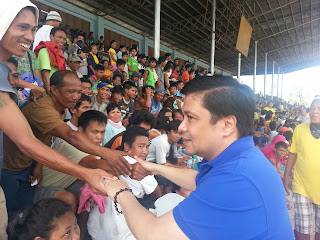 JINGGOY VISITS COMPOSTELA VALLEY. Senate President Pro Tempore Jinggoy Ejercito Estrada offers relief to the people of Compostela Valley as he visited the typhoon-ravaged province last Saturday afternoon. Sen. Estrada, who took a side trip to Compostela Valley after a speaking engagement in Cagayan de Oro City, brought with him a truck load of relief goods and supplies for the affected residents and families. Compostela Valley is one of the worst-hit areas by typhoon “Pablo” which has affected 234 barangays and more than 600,000 persons. Typhoon “Pablo” also left estimated 2.25 billion peso damage to agriculture and infrastructure.
Posted by Unknown at Thursday, December 13, 2012 No comments:

MANILA, December 13, 2012-Senator Loren Legarda hailed the signing into law of the AFP Modernization Act, a measure that allocates at least P75 billion for the first five years of implementation of the AFP modernization program subject to the capacity of the Department of National Defense (DND).

“Tasked to be where the threats and dangers are, we cannot overemphasize the value of the arduous mission our soldiers have to undertake in order to protect the people and the State from lawless violence, invasion, rebellion, terrorist acts and other activities that might affect national security and bring harm to the independence of our nation. This is why they need our support,” she explained.

“The linchpin of our security is now in the waters where our energy, food and environmental security lie. Thus, capabilities and equipment of the AFP should be reinforced to reflect this need,” she said.

“Through the AFP Modernization Act, we are addressing the long-standing concerns of our soldiers who constantly put their lives on the line in the service of our nation. The passage of this Act is a commendable contribution to our national security,” Legarda concluded.
Posted by Unknown at Thursday, December 13, 2012 No comments:

"Today, I wish to underscore the message that everyone must join in the effort to combat human trafficking and the related problems of the illegal sex trade, forced labor, and other forms of slavery. Human traffickers target the most vulnerable sectors of society – men, women, and children from marginalized communities are exploited every day, and this is the injustice that we must all act against," she said.

"By the end of 2011, the country's Inter-agency Council Against Trafficking reported 62 convictions out of a total of 1,519 cases filed between 2003 and 2011. From January to October of this year, however, 38 convictions were made, equivalent to more than half of the total convictions made over an 8-year period," she explained.

"The immediate enactment of the Expanded Anti-Trafficking in Persons Bill, the bicameral report of which has already been ratified by the Senate, brings us closer to our goal of fighting trafficking effectively and I hope the President will sign the measure into law soon," the Senator noted.

"We acknowledge that the problem of human trafficking continues to hound our society, and this is precisely the reason why we need to strengthen our existing law and spread awareness about human trafficking. Let us be vigilant and in doing so, eliminate these injustices in our society," Legarda concluded.
Posted by Unknown at Thursday, December 13, 2012 No comments: