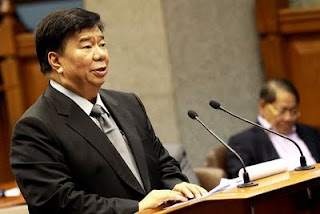 MANILA, August 19, 2011-Senator Franklin Drilon, chairman of the Senate Finance Committee revealed that the intelligence funds of the Philippine Charity Sweepstakes Office (PCSO) last 2004 and 2007 remained unliquidated.
Drilon who is deliberating the proposed P1.816 trillion national budget for 2012 said that the documents pertaining to the use of the intelligence funds could have been concealed by the previous PCSO board, with the Commission on Audit (COA) admitting they have yet to liquidate a still undetermined amount due to lack of records.
“We suspect that the intelligence funds were used by the administration of former President Gloria Macapagal-Arroyo for the 2004 and 2007 elections,” Drilon said.
COA chairperson Maria Gracia Pulido-Tan told the Finance committee yesterday that the former PCSO board has not submitted a liquidation of the state-run charity agency’s intelligence funds, even a certification which is the current practice of government agencies in liquidating confidential and intelligence funds.
“There are no records on file for 2004 and 2007. Interestingly, these were election years. They did not submit reports for 2004 and 2007,” said Pulido-Tan, referring to the previous PCSO board headed by ex-general Manager Rosario Uriarte, who was figured prominently in the illegal disbursement of PCSO intelligence funds.
“After a Senate hearing, it was uncovered that P150 million has been released by the former PCSO board to the former President a few months before the 2010 presidential elections,” Drilon said.
It was bared during a previous Senate inquiry on the PCSO’s intelligence funds that a total of P325 million, excluding the P150 million released during the 2010 elections, has been released by the former PCSO board from 2008-2010.
Uriarte, who served PCSO from 2003-2010, was given the sole authority to disburse intelligence funds which came from PCSO’s public relations funds. She eventually admitted that she issued and encashed the checks with respect to intelligence funds.
Drilon said that they do not even know how much was appropriated for 2004 and 2007 because that has to be checked with PCSO; thus, there is a need for COA to submit the corporate operating budget of the PCSO for the years involved for the purpose of identifying how much has been allocated by the state firm as intelligence funds. (Jason de Asis)
Posted by Unknown at Thursday, August 18, 2011 1 comment:

40 feet landmark unveiled in Baler in its 402nd township occasion

BALER, Aurora, August 19, 2011-A 40-feet-tall monument that towers over this capital town’s skyline will be unveiled today symbolic of its emergence from a once-sleepy municipality into a bustling and flourishing model for rural development.
The unveiling of the landmark at the municipal plaza near the historic Baler Church was the main highlight on the occasion of this town’s 402nd anniversary coinciding with the 133rd birth anniversary of the late Commonwealth President Manuel Luis Quezon.
Senator Edgardo J. Angara, along with Representative Juan Edgardo J. Angara, Governor Bellaflor Angara-Castillo and Baler Mayor Arthur J. Angara will lead the inauguration of the elegant, upward-facing structure called “Baler 400” marking the celebration of the town’s quadricentennial two (2) years ago. 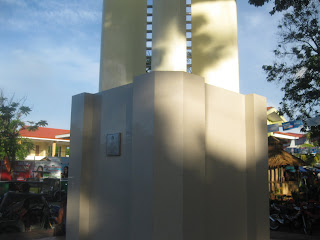 Constructed last year and which was finished last June, the monument was designed by internationally acclaimed artist Luis Lee Jr., more popularly known as Junyee.
Lee also designed the seven-meter high monument, known as  “Open Doors,” at the 65-hectare Holocaust Memorial Park in Rishon, LeZion, the fourth largest city of Israel south of Tel Aviv. It is one of only two monuments in , the other was designed by an Israeli sculptor.
The “Open Doors” monument was inaugurated on June 21, 1999,  70 years after Quezon allotted in 1939 some 10,000 visas and safe haven to Jews fleeing Nazi Europe. Some 1,200 Jews made it to for which Quezon and the Filipino nation were honored for their “open door policy.”
Lee explained that the Baler structure consists of four symbolic pillars, each representing 100 years of the town, which – from the base to the tip – are interconnected by 100 stainless horizontal bars. The four pillars represent the continuous rise of the town from its humble beginnings into one rich in history and culture and an emerging model for rural development.
Lee said that the bars, which glow and glitter during daytime, are like candles to the town’s quadricentennial cake. The platform of the monument is made of Vigan tiles symbolizing the town’s kayumanggi race enriched by its Spanish heritage.
Angara-Castillo said that in its entirety, the monument is a symbol of the town’s inner strength and bright future.
Retired police general Francisco Zubia Jr., chairman of the Baler Festejos 2011, said this year’s anniversary rites, which carry the theme : “Bukang Liwayway ng Kaunlaran at Pag-asa dahil sa Mamamayang Nagkakaisa (Sunrise of Progress and Hope because of a United Citizenry),”  kicked off last August 14 with a series of activities such as skateboarding, streetdancing and soccer competitions; tourism and trade fair, bikathon, cultural presentation, variety show, farmers’ day, historical and painting contests, fireworks display, the “Komedya de Baler” and “Baler got Talent.”


Located 232 kilometers north of Manila on the shore of a horseshoe-shaped coastal valley overlooking the Pacific Ocean, this town is a treasure trove of cultural heritage not only as Quezon’s birthplace but also for being the last bastion of Spanish forces during the Spanish Revolution. It is  the center of festivities for the Philippine-Spanish Friendship Day which is celebrated every 30th of June.
The old Kinagunasan (township) was wiped out when a “tsunami” struck on December 27, 1735, killing 500 families.
Several stories accounted for the origin of the name Baler, the most popular of which was believed to have come from the word “Balod,” a large Paloma Montes (mountain dove) that abounded in the place.
Baler, to historians, was a place where pigeons came home to roost or a place to come home to. And that no matter where Balerianos go in their search for glory and fortune, they would always hope of coming back.
Baler has emerged into a progressive municipality housing a public market, a fish port, sports complex, people’s center, a P130-million integrated rice processing complex, a polytechnic college, and other institutions of higher learning from a depressed town. (Jason de Asis) 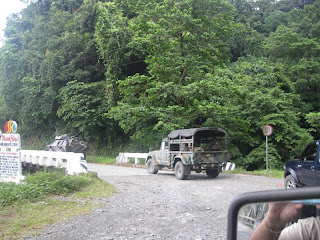 DITEKI, San Luis, Aurora, August 19, 2011-Amid increased sightings of armed rebels some 17 months since this province was declared insurgency-free by local officials, police and the army, Ka Rowena Servante, spokesperson of Domingo Erlano Command (DEC) of the New People’s Army (NPA) in Aurora claimed that four (4) soldiers including the intelligence officer of the 48th Infantry “Guardians” Battalion, Philippine Army were killed in two separate battles which the military denied.
“The soldiers were waylaid down in two consecutive encounters last August 12 and 13 in Barangay Diteki, San Luis town,” the statement said, saying that the first encounter took place at around 11:15 pm when the NPA band, led by a certain Gregorio Torres Alias Ka Lenny/Jake figured in a firefight with 20 soldiers who occupied the Diteki barangay hall.
Servante said it has ambushed a truckload of soldiers who were trying to reinforce their fellow troops in Diteki last August 13 at around 9:10 am. It was reported that one of those killed was Army 1st Lieutenant Dennis Moreno, 48th IB intelligence officer when a bomb was hurled by the rebels.
The skirmish caused the truck to lose control while a V-150 armored personnel carrier which Ltc Kurt Decapia, 48th IB commanding officer was on board retreated to Diteki.
Servante said as an offshoot of the twin incidents, the military arrested five (5) civilians, identified as Arman Arevalo, Arthur Friginal, Ulot Mariano and a couple Nene Genes and Udit Wegan. They said that they were forced to admit that they knew the operations and were released in the afternoon.
The DEC said that these latest incidents were the third and fourth NPA-initiated clash with government troops in the province since last month which belied the latter’s claims that it crushed the backbone of the insurgency in the province. On the other hand, it only showed that the NPAs are very much alive and going strong in Aurora.
The DEC also vowed to launch more armed offensives against the military in the province.
Decapia said that the rebel groups’ claims of army fatalities were a brazen lie. Obviously, it was a black propaganda to make it appear that they are recovering lost ground.
He added that the August 13 incident lasted for only a fleeting five seconds and no one was hurt nor killed, saying what exploded were only blasting caps.
Decapia presented Moreno to the media to belie claims he was shot dead by the rebels, who he estimated to be around seven (7) to ten (10) armed guerillas. The twin incidents only demonstrated the rebels’ desire to recover its base in the province, which used to be its training camp. “It was an act of desperation. They want to show they are still here when in fact and in truth, their presence here is negligible,” he said.
He also denied the NPA’s claim that they arrested the five civilians, explaining they – who were rebel returnees - were merely invited to the camp to shed light in the incident. “We have invited them because we have reports that the NPAs are communicating and trying to win them back even if they don’t want to rejoin them,” Decapia said. (Jason de Asis)
Posted by Unknown at Thursday, August 18, 2011 1 comment:

MANILA, August 18, 2011— Catholics are planning to hold a series of protest rallies in Bataan province after the Aquino administration included the reproductive health (RH) among its 13 priority measures.
Balanga Bishop Ruperto Santos they will also hold series of forums and seminars in different barangays about the negative effects of the proposed birth control measure.
He said they will likewise hold a dialogue with all local officials of Bataan to gather support in their fight against the RH bill.
“With this bill included in the 13 priority bills of President Aquino, we will have a diocesan-wide campaign against RH bill even if we have to go to Malacañang,” Santos told Church-run Radyo Veritas.
“We will definitely hold conferences, seminars and marches against the RH bill,” he said, adding that their goal is to protect the sanctity of human life and the family.
Bataan 1st District Rep. Herminia Roman and Bataan 2nd District Rep. Albert Garcia said they will support the planned protests in Bataan against the bill.
An official of Manila’s Roman Catholic Church is also dismayed over the Aquino’s decision to prioritize the passage of the RH bill.
Fr. Joel Jason, head of Family and Life Ministry of the Archdiocese of Manila, said the Aquino government should learn from other countries who are now suffering the negative impact of said legislation.
Jason cited, for instance, Canada’s aging population and now posing a problem, as is the case for almost every other developed nation in the world that adopted population control measure.
One problem, he said, is that more people leaving the work force than entering it, a factor which poses major challenges for employers.
That is likely to happen also in the Philippines, he said, if a “contraceptive mentality” would develop in the country.
Jason said the Archdiocese of Manila will further strengthen its education campaign why lay faithful should oppose the RH bill. [CBCPNews]
Posted by Unknown at Thursday, August 18, 2011 No comments: