BALER, Aurora, August 27, 2011-In the recent rush of high-profile crimes, outgoing three-term Mayor Arthur J. Angara, president of the provincial chapter of the League of Municipalities in the Philippines said that a “reign of terror” is now gripping the populace particularly the robbery-holdup and theft involving large sums of money believed to be orchestrated by a crime syndicate.
Angara, brother of Senator Edgardo J. Angara told newsmen that the residents of this town no longer feel safe and secure in their homes with the upsurge in robberies, hold-ups and break-ins by lawless elements as he expressed disappointment over the failure of the Philippine National Police (PNP) to solve these crimes.
Angara called to task the PNP leadership in the province, led by provincial director Senior Superintendent Ervin “Jojo” Gumban and Baler police chief, Superintendent Benjamin Villasis Jr. for the towns deteriorating  peace and order situation. 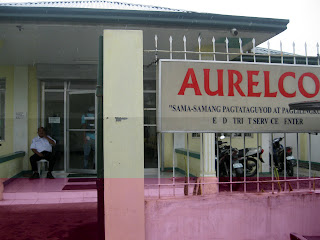 “I am totally disgusted with the performance of the PNP in solving these crimes which have gone unabated. As a result of which many have now grown scared that they will also fall prey to robbers, holduppers and thieves,” Angara said.
After the thieves broke inside the service center of the Aurora Electric Cooperative along Gloria St., Barangay Suklayin Tuesday night, Angara expressed his disappointment and displeasure over the crime waves here.
Police probers said that the still unidentified suspects gained entry inside the service center by cutting the window grill at the backdoor with the use of bolt cutters. They then hauled the two safety vaults from the teller’s office to the stockroom where they cracked them open and carted away P193,798 worth of cash, a hand-held radio transceiver and biometric equipment.
The suspects also pried loose a CCTV camera contained in a black box.
The incident was only discovered Wednesday morning by a lady employee when she reported for work.
Angara said he was aghast with the daring manner the suspects carried out their crime as the service center is situated only a stone’s throw  from the police station. “Imagine the police station is just a few meters away yet the suspects carried out their crime with surprising ease?” Angara wonders.
Tuesday’s incident is the latest in a series of heists in this capital town. Aurora’ smallest municipality which is the center of education, trade and commerce in the province.
Last month alone, four robbery-holdup incidents were perpetrated one after another, even victimizing a reporter who lost his thousand of cash to robbers who barged inside his house. The same reporter lost his laptop to unknown intruders last December 24 last year.
Other victims included a prominent contractor, a former provincial board member and a government employee.
Last year, unidentified men held-up the teller of Western Union and took away P1 million in cash and another P900,000 from Aurora Telecoms personnel and a hardware store owner.
The robbers did not spare Angara’s sister, Governor Bellaflor J. Angara-Castillo whose generator was stashed away by unknown suspects.
Angara said even his own daughter, Provincial Councilor Karen Angara-Ularan, tightened security in her own house when a neighbor got nearly victimized by burglars.
Angara-Ularan said that her move was only a precautionary measure to prevent her family from being victimized and for security purposes.
A nephew of the mayor also adopted security measures in his residential compound following the outbreak of thefts, robberies and break-ins. Before the crime surge, the steel gates of his vast compound were wide open for visitors. His gates were closed and visitors undergo a thorough screening before they could gain entry when the incidents happened.
Relative to this, a group of Bantay Bahay at Tahanan (BANTAHAYAN) was organized in this capital town and if possible to follow through every barangay and province wide to help each other in protecting their homes. The coregroup will serve as the anti-crime watch dog in the province to assist the authorities. (Jason de Asis)
Posted by Unknown at Saturday, August 27, 2011

gotcha' know who's this thieves.