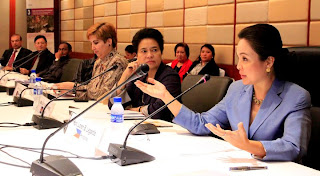 HANOI, Vietnam, March 6, 2011-During the 2nd National Forum on DRR and CCA at the Sheraton Hotel, Ha Noi, Senator Loren Legarda, the UNISDR Regional Champion for Disaster Risk Reduction (DRR) and Climate Change Adaptation (CCA) for Asia and the Pacific, yesterday pushed the urgent passage of a disaster risk reduction and management law in Vietnam.
Legarda said that for more effective and sustainable DRR and CCA programs like the Philippines, Vietnam has compelling reasons to develop an enabling institution, law, and policy environment and yet accomplishing these required a concerted effort of key stakeholders and the unrelenting commitment of leaders to bring about needed change.
The common concern of the two (2) countries are the extreme weather events, stronger typhoons, heavier rains, more severe floods, and devastating droughts have become recurring events, adding that the Philippines regularly exports some of its typhoons to Viet Nam and that the weather events in Manila serve as effective early warnings for Hanoi.
“Vietnam’s disaster risk management legislation is pending in the Parliament, Legarda said, noting that the two new Philippine laws that she had shared with them are a product of passion and perseverance where she hopes that the legislature of Vietnam would find them useful.
“The 2009 Philippine Climate Change Acts provides that the strategic framework for a comprehensive program and action on climate change at national and local levels while the 2010 Philippine Disaster Risk Reduction and Management Act strengthens the country’s institutional mechanisms for disaster risk reduction and management and lends great importance to disaster prevention and mitigation,” she furthered, saying that the ministries of Vietnam may consider taking the same path to effectively build resilience to disasters like the Philippines.
Legarda concluded that in order to succeed to reduce disaster and climate risks building linkages and promotion of common understanding and cooperation among stakeholders are ways of consolidating forces, expertise and resources, whereas our country resorted to these ways when the National Disaster Risk Reduction and Management Council and the Commission on Climate Change entered into a Memorandum of Agreement to do certain initiatives together. (Jason de Asis)
Posted by Unknown at Saturday, March 05, 2011 No comments: 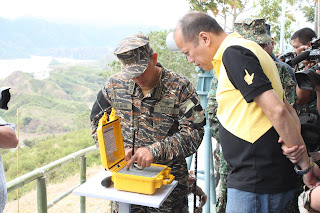 CAPAS, Tarlac, March 6, 2011-In the recent discussion of Philippine government with US President Barack Obama on the urgency to remove and dispose the leftover World War II naval ordnances from Caballo Island, President Benigno S. Aquino III led the culmination of the disposal of some 400,000 pounds of leftover ordnances used during the World War II where he personally detonated the last two pallets of 287-pound Mk 6 depth charges and two pallets of 190-pound Mk 9 depth charges using a radio firing device some 1.6 kilometer away from the blast range at Crow Valley here. 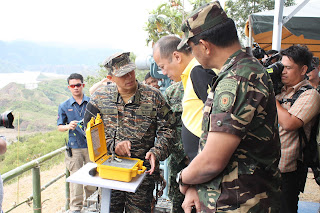 At the Caballo Island where the said explosives were restored, three-phase EOD operations started with the stabilization and rendering safe the ordnances, segregation, and its placement on pallets including site survey, engineering works and logistics fill-up at Crow Valley and coordinating conferences with EOD teams where the first phase conducted for 15 days from January 20 to February 4, while phase two included the safe transport of ordnances from Caballo Island to Crow Valley last February 6.
Earlier in February, the exercise was led by the Naval Special Operations Group (NAVSOG) of the Philippine Navy was the last of three phases of the Joint Explosive Ordnance Disposal (EOD) Operations with EOD teams from the Army, Air Force, Philippine National Police (PNP) and Coast Guard. 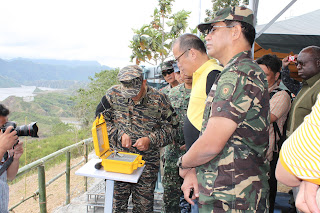 Phase three is the disposal by safely and gradually detonating the leftover World War II naval ordnances at the demolition range of the Philippine Air Force at Crow Valley in barangay Sta. Juliana, Capas.
President Aquino lauded the Armed Forces of the Philippines and to all those involved in the success of the operations where he was impressed on how the team managed to complete the disposal operations weeks ahead of the targeted date of completion set on March 20.
The Chief Executive also lauded the safe transport of the explosives from Subic to Caballo Island to Crow Valley, saying that the operations were carried out safely. (Jason de Asis)
Posted by Unknown at Saturday, March 05, 2011 No comments: