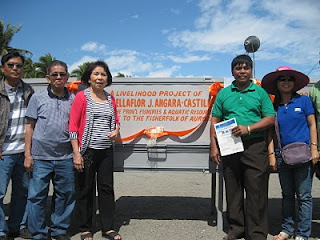 BALER, Aurora, February 16, 2011-Governor Bellaflor Angara-Castillo donates three (3) fish smoking chamber (tinapahan), 10 bottom set gillnet and a live fish container and souvenir t-shirts for the fisherfolks of Aurora and the 119 fishermen who joined the “baler bay angling contest 2011” led by Provincial Fisheries and Aquatic Resources Officer (PFARO) chief Victoriano San Pedro held at Brgy. Sabang beach yesterday here.
Angara-Castillo said the importance of fishermen in the everyday lives of Aurorans especially in delivering fresh fish in the market, saying that they are the pillars of businessman and buyers purchasing their products, as they say all of them are the real hero for showing to the world that they are using traditional fishing and not illegal fishing.
The lady governor added that the open type fish smoking chamber aims to promote and intensify processing activities in Aurora to produce value added products as additional income through provision of fish processing equipments to the small scale fish processor by the provincial government of aurora and PFARO.
She also directed PFARO chief San Pedro and Brgy. Captain Benedicto Isaguirre to submit to her office the names of the Baler Anglers club, Inc. and the contestants who joined yesterday and last year in order to give scholarship for elementary, high school and college who really needs it, adding that she requires the duo to submit it to her on the month of May, and directs them to create livelihood projects that is feasible in the said barangay where she manifests her willingness to give personal cash money for the start up of their chosen business for fishermen.
San Pedro said that the events started 5 years ago after the consultation with the fisher folks to conduct it every year to promote aqua tourism and sustainable development in the province, saying that Aurora is really a paradise which maintains the traditional method of fishing and ensures fresh fish.
“Although that the province has too much reefs, he is planning to have artificial reefs here in Aurora for the house of the fish for the anglers and make sure that they will continue promoting natural method of fishing,” San Pedro said, adding that this artificial reef is a human-made underwater structure, typically built for the purpose of promoting marine life and improve hydrodynamics for surfing or to control beach erosion.
“We will use bamboos for this artificial reefs designed to provide hard surfaces to which algae and invertebrates such as barnacles, corals and oysters cling, the accumulation of marine life in turn provides intricate structure and food for assemblages of fish,” San Pedro explained.
Meanwhile, results of the contest in connection with the 32nd Aurora Day Celebration of “Kawilan sa Dalampasigan”. Special cash prices were awarded to Joseph Ajinto, Geronimo Carrasco and Efren Belen for best in fishing attire, Eulogio Duldulao for oldest Angler with catch, Alvin Cailing who received fastest catcher and youngest angler with catch, Virgilio Aganad for smallest single catch and Joseph Ajinto for the biggest catch. For the over-all major prizes, Ana Macanili won the third place, Francis Villamora for second price and the 1st price was awarded to Joseph Ajinto. (Jason de Asis)
Posted by Unknown at Wednesday, February 16, 2011