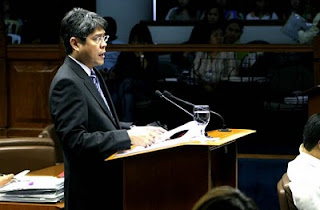 SENATE OFFICE, Manila, March 8, 2011-To address rising global food prices, Senator Francis “Kiko” Pangilinan, who chairs the Senate Committee on Agriculture and Food in the committee hearing called in the government to be prepared in the contingency measures and also cautions the public and media to temper the issue and not to panic.
The hearing was conducted to assess the government’s preparedness amidst the prolonged political turmoil in the Middle East and North Africa which at the moment is affecting the price of oil. It was attended by Department of Agriculture Secretary Proceso Alcala, Department of Trade and Industry Secretary Greg Domingo, National Food Authority Director Lito Banayo, and representatives from the United Nation’s World Food Programme and Food and Agriculture Organization, National Economic Development Authority as well as representatives from various agricultural sectors and the academe to ensure that the prices remain stable and that there is enough food supply in the country.
Pangilinan presided over an inquiry in aid of legislation on the government’s ability to address the sudden increase of the prices of foods and other agricultural products where he recommends the government agencies concerned through the Executive Department to look at stockpiling measures the same with the other countries doing to protect their buffer of food.
To prevent unscrupulous traders from taking advantage of the situation, Pangilinan urged the DTI and consumers to aggressively monitor prices of basic commodities in the market nationwide.
The committee gathered that the prices of pork and chicken remain stable, and the price of onion has gone down. NFA reported that the country’s rice supply is still sufficient, however the price of flour, milk and sugar are going up and thereby the price of bread to go up while the oil price increases and obviously affecting the prices of all the commodities.
“These are the reasons why we are conducting this inquiry,” Pangilinan said, saying that he wants to make sure that we are not caught with our pants down in the worst case scenario.
“It is better not to panic and be prepared for the possible scenario. Let us be alarmed so that we may not to be caught unaware of the price increases,” the Senator said. (Jason de Asis)
Posted by Unknown at Tuesday, March 08, 2011

That's better. The government can make any move for the possible scenario that might happen in the Philippines. There must be Plan A,B,C,D,E and others strategy to be prepared always no mater what.