SANTO DOMINGO, Nueva Ecija, July 20, 2011-Senior Superintendent Roberto L. Aliggayu, provincial police director reported that four suspected robbers believed to be members of a dreaded robbery-holdup gang who were responsible for a string of incidents in northern province were slain in a shoot-out with Nueva Ecija cops shortly after the suspects held-up a Baliwag Transit bus bound for Manila at dawn here today. 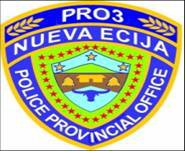 “The robbers who were killed in action (KIA) were Daryl Germino, Jeric Ace Dela Cruz, Raymund Dela Cruz and Mandy Villa, all of barangay Maliolio, Santa Rosa, Nueva Ecija,” Aliggayu said, explaining that the four belonged to Petinez group who were responsible in the series of robbery-hold-up incidents in the towns of Talavera and Guimba, Muñoz Science City and San Jose City.
He said that around four in the morning, the Sto. Domingo police led by Chief Inspector Eric De Venancio conducted hot pursuit operations against the suspects shortly after they robbed a Manila-bound Baliwag Transit bus with license plate CBS-472.
The four suspects flagged down the bus in barangay Malasin, San Jose City and at gunpoint announced the heist and thereby divesting the passengers’ cash money, mobile phones, jewelries, and other valuable belongings of the victims then fled aboard with two motorcycles.
Authorities conducted hot pursuit operation where the lawmen gave chase after the fleeing suspects were spotted driving along barangay Burgos here.
“The suspects were told to stop by the police but instead they fired at our police that brought to instantaneous firefight which resulted to the death of the culprits,” Aliggayu said.
Cops recovered from the scene of the crime caliber 45 pistol with magazine, two caliber 38 revolvers, a hand grenade, bag containing the loot, several empty shells for caliber 45 and 38, crash helmet and two motorcycles. (Jason de Asis)
Posted by Unknown at Tuesday, July 19, 2011

Congratulation to all PNP of Nueva Ecija for their dedication to duty in fighting those robbers. Mabuhay po kayo.

Bad boys, whatcha gonna' do when they come for you?..

If there's a chance I will bit them using techniques in Martial arts but if there's no chance I will follow the order of the robbers for safety, then, after they fled, I'll report it to the police.

Bwha ha ha ha ha .... they might kill you. Just call our good cops in nueva ecija if there's such kind of elements for your safety.