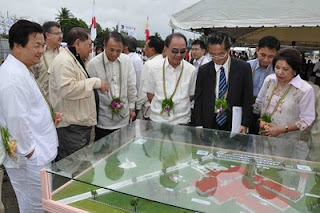 BALER, Aurora, September 17, 2011-Governor Bellaflor J. Angara-Castillo said that this province will have a P594-million new modern hospital complete with state-of-the-art equipment and facilities within three (3) months.
“The Japanese contractors assured that the upgrading of the Aurora Memorial Hospital at a 3.8-hectare lot in Barangay Reserva will be completed in December and will start full-blast operation by February 19, 2012 on the occasion of the province’s anniversary,” Angara-Castillo revealed, adding that the completion of the project by the end of the year is ahead by three months from the original target completion date of fifteen (15) months.
The governor made the announcement after the briefings by the Japanese consultants and contractors whom she identified as project manager Hatano, consultant’s representative Yasuhiro Matsumoto, Manabu Tokita and Sadaharu Shioni of the Toyo Construction Co. Ltd. which was commissioned by the Japan International Cooperation Agency (JICA) to construct the project.
The hospital will have administration, emergency and operation and delivery buildings; 50-bed capacity ward buildings, service building, and ancillary buildings such as a guardhouse, mortuary and others once it was completed.
“The hospital project is the complete package since it will be equipped with sophisticated equipment,” Angara-Castillo said, saying that  the  hospital will have dental, physical therapy and radiology equipment such as general x-ray system, automatic  x-ray film processor and ultrasound machine for general examination; laboratory equipment (hematology analyzer and autopsy table), central supply and sterilization room equipment and equipment for the ward such as infant warmer and mechanical ventilator.
It also includes other equipments like four defibrillators, anesthesia apparatus with vaporizer, operating tables and EENT.
The project is funded through a P509-million grant from the Japanese government’ and P85-million in counterpart funding from the provincial government.
Angara-Castillo said that the grant-in aid provided by the Japanese government for the project is a testament to its generosity considering that when it was about to be implemented, a killer earthquake and tsunami struck Japan.
“When the tsunami hit Japan, I was having reservations about the project but the Japanese government assured us they would proceed with the aid in spite of the crisis,” she said.
The lot for the hospital was donated by Angara-Castillo’s brother, Senator Edgardo J. Angara, who initiated the project along with Congressman Juan Edgardo “Sonny” Angara, Mayor Arthur J. Angara and Japanese Ambassador Makoto Katsura.
The existing 70-year-old memorial hospital in the town proper does not have enough facilities at this point in time. The AMH is functioning only as a small hospital covering the central towns of the province prior to the upgrading of the project.
The present 25-bed capacity hospital’s license was even lowered from Level 2 to Level 1 when the Department of Health (DOH) clamped down on hospitals without a trained surgeon and an anesthesiologist.
Last 2009, the provincial government prompted to seek assistance from the Japanese government which conducted a preparatory survey and dispatched a basic design team.
With upgraded facilities, the AMH would be able to confine 800 more patients per year without transferring them to other places, thus reducing their expenses. It would also increase the total patient-days confined from the present 7,700 patient-days to 13,000 patient-days.
Improved facilities would not only enhance the quality of the hospital’s medical services but also examination and medical care capacities, especially in surgery, obstetrics and gynecology departments.
AMH is also being eyed as the province’s training institution for the midwifery and nursing students from the University of the Philippines School of Health Sciences. (Jason de Asis)
Posted by Unknown at Friday, September 16, 2011