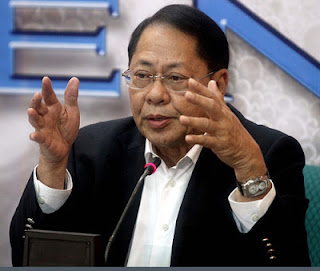 MANILA, March 18, 2013-In the light of the tragic death of UP Manila student Kristel Tejada, Senator Edgardo J. Angara called on government to tap establish a legacy fund for education out of the revenues derived from the exploitation of the country’s natural resources.

Angara explained that such legacy fund is a more durable and sustainable way of financing the country’s education needs compared to leaving it wholly up to annual Congressional appropriations.

“I call this a legacy fund because legacy means securing the future, and the future is our children,” he said.

“The unfortunate death of Kristel strikes at the heart of what every Filipino family values—education for their children,” said Angara. “As we pray for Kristel’s repose and condole with her family, we must also strive to prevent poverty from driving our people to such extreme measures.”

Angara lamented that public investment in education as a percentage of gross domestic product has been declining. From a high of 3.8 percent in 1998, the present ratio is down to 2.1 percent, barely half of the United Nations’ recommendation of at least 6 percent.

The K to 12 program alone will require as much as P56.6 billion by 2017-2018 to finance senior high school (Grades 11 and 12) enrollment and additional teachers, classrooms, seats, textbooks, and toilets.

Angara cited government’s income stream from the Malampaya natural gas project as a major source for the legacy fund.

He said government share in the proceeds from the Malampaya natural gas project amounted to half a trillion pesos for the past 11 years, averaging $1 billion a year. The remaining 13 years left to the project are expected to further yield P580 billion in revenues for government.

“We should take our cue from the likes of Norway and Timor Leste which have set aside a substantial portion of their oil and gas revenues for social services, especially education,” noted Angara.

Other important sources for the legacy fund are the Philippine Amusement and Gaming Corporation and the Philippine Charity Sweepstakes Office, both of which are expected earn about P100 billion each this year.

“The same principle applies—let government set aside a substantial portion of gaming and lottery earnings to support education,” said Angara.

“Our needs are staggering so our response should be resourceful and extraordinary,” he continued.

“The lack of funding should never be made an excuse to abandon reforms. Similary, the lack of money should never inhibit our youth from getting into school. We should be harnessing the potential of young Filipinos like Kristel, not squandering it.”
Posted by Unknown at Monday, March 18, 2013