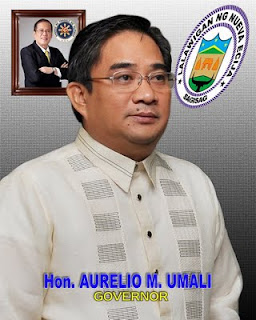 – Nueva Ecija Gov. Aurelio Umali has expressed grave concern over reports that precinct count optical scanner (PCOS) machines to be used in the May 13 elections in the province are defective and might not reflect the true will of majority of Novo Ecijanos.
“It’s really a concern. If there is a question over the PCOS functionality, then we’ll gonna have a problem,” he said in reaction to reports that some of the PCOS machines bogged down during a training demonstration to teachers sitting as board of election inspectors (BEIs).
A total of 5,610 BEIs in the province will undergo training on the operations of these PCOS machines in the run-up to the May polls.
According to reports, at least six of these machines malfunctioned and encountered glitches when used for demonstration by officials of the Commission on Elections (Comelec).
Reporters tried to get the side of acting provincial election supervisor lawyer Florentino-Pangilinan but she was unavailable. But a Comelec insider who did not want to be identified because he was not authorized to speak on the issue said the six PCOS machines that conked out may have been overused.
Umali said in 2010, glitches were encountered in the use of these PCOS machines in the province. He said a particular candidate for mayor in a city got zero vote in his own barangay.
He said a former congressman also encountered the same problem in two northern Nueva Ecija towns.
Aside from glitches, the Comelec is also under fire because it does not have the source code to run the PCOS machines.
The source code is the all-important set of computer commands to make the PCOS recognize and count the vote marks, reject fake ballots, and transmit tallies to canvassing centers.
The Automated Election Code of 2008 and the initial lease contract of 2009 require the Comelec and its dealer Smartmatic of Venezuela to require the showing of the source code to the public through IT (information technology) experts and to political parties and to a reputable independent tester for accuracy and security.
Canada-based Dominion is the real and sole owner of the technology offered by Smartmatic for the Philippine elections, a fact it did not disclose before the 2010 polls.
A citizens’ election monitor alliance said the 2010 PCOS machines which will also be used in the May 2013 polls are “fatally flawed” and have bugs that are “unacceptable in IT standards” and therefore should never be used again.
Umali said these PCOS machines are not 100% reliable. “It’s scary. I hope the Comelec can do something about it,” he said.
Umali said that while glitches were not that rampant in the 2010 elections, this is something every Novo Ecijano voter should be worried about.
“Unless this is addressed, the people would have doubts about the results,” he said. (Manny Galvez)
Posted by Unknown at Wednesday, April 03, 2013