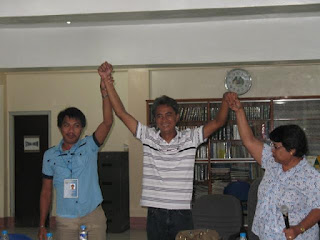 BALER, Aurora – Outgoing Vice Gov. Gerardo Noveras was officially proclaimed Tuesday night as the duly elected governor in Aurora, heralding the changing of the guard in the Capitol in this province where the Angaras are the political kingpins.
Noveras was proclaimed by the Provincial Board of Canvassers led by Commission on Elections provincial election supervisor, lawyer Jocelyn Postrado at the packed session hall of the Sangguniang Panlalawigan at 11 pm Tuesday along with his allies board members-elect Bobong Ong and Mariano Tangson.
A few minutes later, congressional chief of staff Rommel Angara was also proclaimed duly elected vice governor over former Baler mayor Emil Etcubanez and her aunt, outgoing three-term Gov. Bellaflor Angara-Castillo as winner in the race for the lone House seat.
Noveras of the Nationalist People’s Coalition garnered 47,167 votes as against the 37,312 of his rival, outgoing three-term Baler Mayor Arthur Angara of Laban ng Demokratikong Pilipino.
Noveras won in five of the province’s eight municipalities, including a margin of 4,000 in his hometown Maria Aurora. He lost in the towns of Dingalan, Dinalungan and in this town.
Noveras’ midnight proclamation was made even with the results in the town of not yet transmitted to the provincial canvassing center here after it was erroneously reported in a television station that the Comelec proclaimed Mayor Angara as duly elected governor.
The controversial report of TV 5 was personally watched by the vice governor himself.
This prompted Noveras to file a motion for his proclamation on the ground that it is no longer possible to affect the outcome of the elections even without the results in Dilasag. The PBOC granted the request.
Noveras said Mayor Angara conceded defeat and congratulated him. “He relayed to me his wish that I would continue to pursue the vision for development of the Angaras,” he said. – Manny Galvez
Posted by Unknown at Wednesday, May 15, 2013