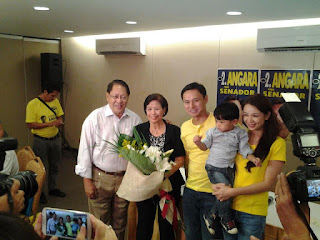 Regal Entertainment producer Lily Monteverde endorsed Team PNoy senatorial candidate Edgardo "Sonny" Angara today (May 7) in a press conference at the Imperial Palace Suites in Quezon City.
“I support Sonny Angara because of his exceptional credentials and track record. He has attained excellent education here and abroad. In his nine years as congressman, he has accomplished incomparable legislative work and projects not only for his district but for the entire country,” said Monteverde, a pillar of the Philippine entertainment industry.
“In my decades of experience as a producer, I can say that I’m a good judge of character. I know a qualified candidate when I see one, and Sonny Angara is definitely among them,” she added.
Monteverde also noted the achievements of the senatorial candidate's father, Senator Edgardo Angara, who was in public service for 24 years. The older Angara, the longest serving post-Edsa senator, is now on his last term.
“Sonny’s a very smart, hardworking and competent public servant. There’s no doubt he would continue, or surpass even, the outstanding performance of his father in the Senate,” the movie mogul said.
Angara said that an endorsement from Monteverde is definitely “sought after,” since her stature in the Philippine entertainment industry carries a lot of weight.
“I am deeply thankful for the vote of confidence Mother Lily has shared for my candidacy, especially since she is really known to follow stringent criteria in choosing who she endorses. Piling-pili po talaga ang kanilang endorsements,” said the Harvard-trained lawmaker.
Earlier, Angara was endorsed by Senator Miriam Defensor-Santiago, who described him as “young and idealistic, also full of sex appeal.”
Kris Aquino, top celebrity endorser and sister of President Benigno Aquino III, also backed Angara’s candidacy explaining that she really feels that the Aurora representative wants to serve.
“Sa mga batas na naisulong niya, buong pamilya naalagaan na ni Sonny Angara,” said Aquino during an earlier ambush interview.
Posted by Unknown at Tuesday, May 07, 2013