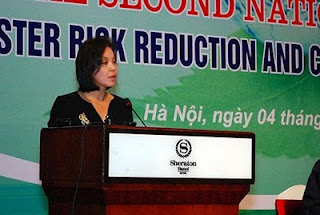 Hanoi, Vietnam, March 7, 2011-To avert further losses of lives and livelihoods from disasters, Senator Loren Legarda, Chairperson of the Philippine Senate Committee on Foreign Relations, urges the member-states of the Association of Southeast Asian Nations (ASEAN) to prioritize disaster risk reduction (DRR) and climate change adaptation (CCA) in national development agenda.
In addressing high-level officials of the Government of Vietnam led by Deputy Prime Minister Hoang Trung Hai at the Second National Forum on Disaster Risk Reduction and Climate Change Adaptation held in Hanoi, Legarda said that we cannot content ourselves with merely reacting to disaster events that claimed countless of lives, ruined properties, and left lingering effects on people’s livelihoods and the environment; thus, there is a need to protect our development gains from the regressive impacts of disasters, adding that in order to win against disaster climate change there is a need to be proactive. 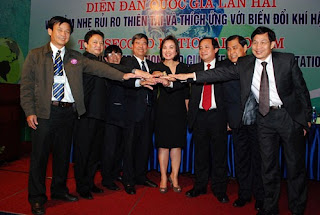 Legarda noted that the ASEAN Committee on Disaster Management (ACDM) and the United Nations Regional Coordinating Mechanism (UN-RCM) agreed to prepare the ASEAN-UN Strategic Plan of Cooperation on Disaster Management for 2011-2015 which shall cover risk and vulnerability assessment, preparedness and early warning, among other disaster risk management activities where the 3rd ASEAN-UN Summit was held in Hanoi, Vietnam last October.
Legarda said that if national leaders govern with commitment, responsibility, and accountability to bring about a safer and more resilient society the rising trend of disaster risk can be stopped, adding that climate change has already made its effects in our region like extreme weather events, stronger typhoons, heavier rains, severe floods, and devastating droughts have become recurring events, a common concern for many countries in Asia.
She furthered that the ASEAN member-states, based on what was agreed upon at the ASEAN Summit, must actively collaborate and pursue efforts to build disaster and climate-resilient communities within the region, saying that if national leaders consider risk reduction not as a cost but a wise investment disasters can be prevented.
Legarda added that no conscientious leader would want to see the poor and most vulnerable constantly drawn back by disasters into abject poverty for lack of government action and no responsible politician would want the government to waste millions on public infrastructure that can be instantly destroyed by earthquakes and floods.
The Senator was invited in Hanoi to share the 2009 Climate Change Act and the 2010 Philippine Disaster Risk Reduction and Management Act that she authored and sponsored and now considered legislative models by the UNISDR and the Inter-Parliamentary Union for other nations to emulate.
Legarda revealed the UN report that Asia is the world’s most disaster prone region, saying that the Asian people are four times more likely to be affected by disasters caused by natural hazards than those in Africa; and 25 times more likely than those in Europe or North America. (Jason de Asis)
Posted by Unknown at Sunday, March 06, 2011

It is always the human resources who stained the goodness of what so ever planned we would like to implement...The success will be depend on the correctness of the decision in protecting our people and nature. A comprehensive plan is needed.

We salute you Mam.