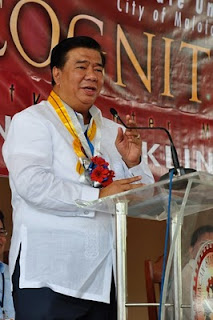 SENATE OFFICE, Manila, March 7, 2011-Amidst the irregularities uncovered in the highly controversial plea bargain agreement forged between state prosecutors and a former military comptroller accused of plunder but was later charged with lesser offenses, Senator Franklin Drilon, a former justice secretary proposed a new set of policy that would govern plea bargaining agreement in the criminal cases under Senate bill No. 2732 otherwise known as Plea Bargaining Act of 2011.
Drilon filed the said bill following the Senate Blue Ribbon committee’s sixth round of inquiry into the plea deal by former Gen. Carlos Garcia, who was allowed to post bail despite glaring evidence and testimony exposed in the chamber’s hearings.
“There should be a clear cut law that would establish a formal policy implementation of plea bargaining agreements,” Drilon said, explaining that without legislation, individuals accused of grave offenses like plunder would just enter into a plea bargain with the prosecution even without the consent of the offended party.
Drilon furthered that the proposed legislation would form part of the recommendations of the Blue Ribbon committee that allows a plea of the accused in a criminal case to a lesser offense with the consent of the offended party, in a move that trails the Garcia case grossly disadvantageous to the government part.
He said that during or after the presentation of the prosecution evidence, the prosecution may enter into plea bargaining with the accused with the consent of the offended party, but before the presentation of the defense evidence, and in no case after the dismissal by the court of a demurrer to evidence, the following conditions must be provided and presented such as the evidence of the prosecution is insufficient to prove the offense charged beyond reasonable doubt; in cases involving the recovery by or restitution to the offended party of property in crimes against property and those committed by the public officers in relation to public funds such as, but not limited to, the crime of plunder, graft and corrupt practices, bribery, and malversation, the accused makes a full restitution of the property or public funds involved; and in cases of conspiracy, the accused fully cooperates in the prosecution of principal conspirators responsible for the commission of the offense charged who are the most guilty, including in the provision of documentary, object and testimonial evidence, in the event that the accused has not yet qualified as a state witness in accordance with the Rules of Criminal Procedure.
“When there is no private offended party in the offenses charged,” Drilon said that the party whose consent is necessary shall be the People of the Philippines as represented by the prosecution, the Republic of the Philippines as represented by the Office of the Solicitor General and the government agency represented by the Solicitor General responsible for the enforcement of the law violated by the offense, adding that if the penalty imposable for the offense charged is prison mayor or six years and one day imprisonment, or higher, or a fine exceeding P12,000, the plea bargaining agreement shall first be approved in writing by the city prosecutor, provincial prosecutor or the prosecutor general in criminal cases handled by the National Prosecution Service, the Ombudsman in cases handled by the Office of the Special Prosecutor, or the head of the agency in the case of other agencies authorized to prosecute criminal cases, before it is submitted to the court for approval. Without the written approval of the respective approving authorities the plea bargaining will not be allowed.
Drilon, who is a staunch critic of the Garcia plea bargain who strongly urged the Ombudsman to drop the motion to approve the plea bargain before the Sandiganbayan anti-graft court explained that the guidelines setting will ensure that the process does not become a mere vehicle for diluting the gravity of the offense charged against the accused, for destroying the deterrent value of the law intended to prescribe the offense committed or for creating opportunities for graft and corrupt practices.
Drilon noted that there are instances that a plea bargain is needed but there should be check and balance, adding that a fine ranging from Php6,000 to Php60,000 to any violation with the penalty of imprisonment ranging from six months and one day up to six years shall be the punishment. (Jason de Asis)
Posted by Unknown at Sunday, March 06, 2011