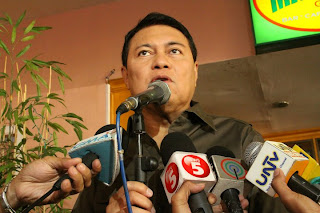 SENATE OFFICE, Manila, March 24, 2011-Senator Manny Villar offers “Libreng Tawag" project of the OFW Helpline for those who are in need around the world where the toll free overseas calls project will last for one month and would be coursed through the Bantay OFW radio program of Toots Ople aired live over DZXL-RMN Manila every Monday to Friday and will run until April 23.
Villar said that the public who are worried about their loved ones abroad especially those in troubled areas around the world, can be reunited on air through the "Libreng Tawag” project centered on the welfare of OFWs all over the globe, adding that the free telephone calls would give families the chance to be briefly reunited with their loved ones who are working in different parts of the world.
“Relatives or families wishing to contact by overseas telephone call their loved ones abroad will just have to visit the RMN-DZXL station at the fourth floor of Guadalupe Commercial Complex in Guadalupe, Edsa, Makati City from 9am to 12 noon,” Villar said.
“The project is for the benefit of relatives especially those who are in countries gripped by unrest like Middle East and North Africa and of natural tragedies like Japan and New Zealand, Villar said, adding that the project is part of the Senator’s crusade to help our countrymen abroad who are experiencing crisis and tragedy so that they can share their situation in their love ones who are in the Philippines.
“Until now since pro-democracy movements erupted in the Arab world, some families of OFWs who are based in the Middle East and in North Africa's Libya have remained clueless on the true whereabouts of their loved ones,” Villar stressed, saying that there are still families who have not contacted their relatives in the aftermath of the killer quakes that rocked New Zealand and Japan, which are being compounded by threats of possible nuclear radiation for Japan-based Filipinos.
He said that with the absence of communication lines that could be used to reach out to their relatives and vice-versa, the pain of not personally hearing the assuring voice of a loved one in a strife-torn nation becomes increasingly unbearable, pointing out that even if there are available communication lines, access is still a problem since applicable rates charged by international and local service providers are relatively high.
“This is where our Libreng Tawag project with the help of the radio program of Toots will seek to connect the two parties and possibly reunite them even for a moment via the airwaves,” Villar added.
“The precious phone minutes that a worried-sick family member would spend soliciting words of assurance from his beloved OFW relative would be enough to lessen the entire family's anxiety,” he furthered.
Villar also lauded RMN Manila and Ople, who also heads the Ople Policy Center, for co-spearheading the "Libreng Tawag" project. (Jason de Asis)
Posted by Unknown at Wednesday, March 23, 2011