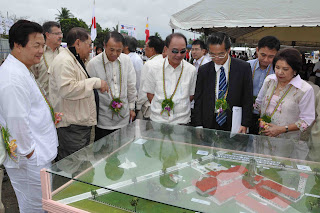 BALER, Aurora, March 18, 2011-The Philippines and Japanese governments have launched the P594-million upgrading project of the Aurora Memorial Hospital in this capital town aimed at fortifying the medical referral system and the qualitative improvement of medical services in the province through Japan International Cooperation Agency, amidst the devastation caused by a killer earthquake and tsunami in Japan.
The grant-in aid project was launched following recent ground-breaking ceremonies at the AMH’s 3.8-hectare project site in Barangay Reserva here where Senator Edgardo J. Angara, who initiated the project with Rep. Juan Edgardo Angara, Gov. Bellaflor Angara-Castillo and Japanese Ambassador Makoto Katsura on the said hospital upgrading.
The project would also facilitate as a general hospital playing a central role in the local health referral system included aside from improving of the AMH’s infrastructure and equipment.
Aside from Katsura, the ground-breaking rites were witnessed by JICA Chief Representative Norio Matsuda, Japanese Embassy First Secretary Takeshi Sakata and Health Secretary Enrique Ona among others.
The hospital upgrade was funded through a P509-million grant from the Japanese government and P85-million in counterpart funding from the provincial government and projected to be completed in December 2011.
“The common goal of the Japanese and Philippine governments is to prioritize human development projects in the province,” Angara said, who donated the land for the new building, saying that the project is through Japan’s generosity that’s why the AMH will be one of the most advanced in the region in terms of equipment and facilities. 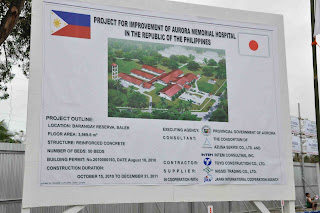 Angara furthered that the Japanese government has gone beyond the usual land grants or donations for the basic structure, they have instead chosen to build a fully equipped hospital in our humble but deserving municipality, adding that among the structures to be put up in the project site are administration, emergency and operation and delivery buildings, 50-bed capacity ward buildings, service building, and ancillary buildings such as the guardhouse, mortuary and others.
Angara said that the 70-year-old memorial hospital will also be provided with state-of-the-art equipment such as dental, physical therapy and radiology equipment such as general x-ray system, automatic x-ray film processor and ultrasound machine for general examination; laboratory equipment (hematology analyzer and autopsy table), central supply and sterilization room equipment and equipment for the ward such as infant warmer and mechanical ventilator.
It also includes other equipment like four defibrillators, anesthesia apparatus with vaporizer, operating tables and EENT.
The AMH would be able to confine 800 more patients per anum without transferring them to other provinces and will lessen the financial burden on the part of the families with the upgraded facilities.
It would also increase by nearly twice the total patient-days confined from the present 7,700 patient-days to 13,000 patient-days.
The improved facilities would also enhance the hospital’s examination and medical care capacities, especially in surgery and obstetrics and gynecology departments and the quality of medical services. In the process, the AMH would also be used as the training institution for the midwifery and nursing students from the University of the of Health Sciences in the province.
Prior to the launching of the hospital upgrading project, the AMH is functioning only as a small hospital covering the central towns of the province. The present 25-bed capacity hospital’s license was even lowered from Level 2 to Level 1 when the Department of Health clamped down on hospitals without a trained surgeon and an anesthesiologist.
This prompted the provincial government represented by Governor Bellaflor Angara-Castillo to seek assistance from the Japanese government which, in response, conducted a preparatory survey in January 2009 and dispatched a basic design team in June of that same year.
On March 15, 2010, the Exchange of Notes was signed in Manila by then-Foreign Affairs Secretary Alberto Romulo and Katsura.
Angara, who authored the law that created PhilHealth and the Child Health Insurance Program, said that the project would enable Aurora not only to be removed from the list of poorest provinces of the country but go a step further by becoming a role model for rural development through the cooperation of local, national and international agencies. (Jason de Asis)
Posted by Unknown at Thursday, March 17, 2011

Does this mean that ALL the healthcare to be provided by this government hospital is completely free of charge as a true christian way?

would there be no PET and CT scan and MRI equipments?

That's great for the Auroran's. Napaka-swerte ninyo to have Senator Angara.