Manila next venue for global conference of parliamentarians 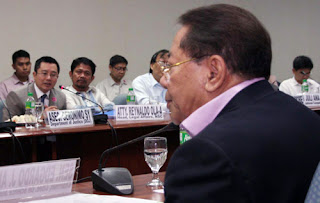 SENATE OFFICE, Manila, March 17, 2011-In line with the Aquino administration's current flagship program of anti-corruption, Senator Edgardo J. Angara said that the Global Organization of Parliamentarians Against Corruption (GOPAC) has chosen Manila as the venue of its next global conference in February 2013.
Angara, who is the founding president of Southeast Asian Parliamentarians Against Corruption (SEAPAC) is the only Asian representative who presides over a session of the 4th Global Conference of Parliamentarians Against Corruption held on Saturday in the Mexican capital.
The Philippine Senate and the Southeast Asian Parliamentarians Against Corruption (SEAPAC) will jointly host this biennial global gathering which will be attended by over 500 members of parliament from 50 countries worldwide.
GOPAC is the only parliamentary network with the singular focus on combating corruption. There are currently over 900 members of GOPAC, representing over 90 countries in all the regions of the world.
Dr. Nasser Al Sane of Kuwait was re-elected president of GOPAC while Senator Edgardo J. Angara was elected vice president.
In 2005, Angara was the driving force behind the establishment of SEAPAC and is a member of the Executive Board of the Ottawa, Canada-based GOPAC.
The Senator said that to achieving good governance and fighting corruption can be strengthened by building networks among institutions, saying that the key ingredient is International cooperation. “Just as corruption transcends borders, so too must we fight it on a transnational level,” he said.
Angara led the passage of major anti-corruption laws including the Government E-Procurement Law and creation of the Office of the Ombudsman in the Philippines where he pushes for the Political Party and Campaign Finance Reform bill that will transform political parties into public institutions and maintain transparency activities. (Jason de Asis)