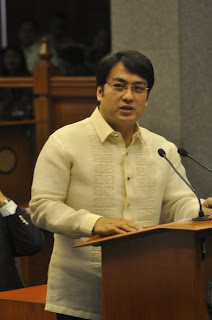 SENATE OFFICE, Manila, March 16, 2011-Senator Ramon “Bong” Revilla Jr., chair of the public service urged the National Telecommunications Commission (NTC) to exert all efforts to identify the source that sparked reign of terror in the spread of the malicious text messages that caused panic to the public where the Senate asked why the NTC cannot effectively address to identify such kind of malicious text messages that spread all over the Philippines.
“It was a hoax intended to put the citizenry in panic and bad light,” Revilla said, adding that he advised the public not to believe in rumor mongers and gossips regarding the meltdown at Fukuyama or some other places in Japan, and on the radiation threatening to affect other places like the Philippines.
He furthered that the NTC informed the Senate that they do not have the capability to specifically identify the people doing this counterproductive rumor-mongering and what they can do is merely deactivate the SIM cards used because they do not have a database showing to whom the SIM cards are issued, at least for prepaid SIM cards.
“Babalik tayo sa usapin ng SIM card registration na tinatalakay at pinag-aaralan ngayon ng Senado sa pamamagitan ng Senate Committee on Public Services na aking pinamumunuan,” Revilla said.
He said that there is a need to strike a balance between privacy and public interest issues where he personally believes that these people must be held accountable, adding that we must empower our agencies particularly the NTC.
Revilla urged the public to exercise caution when receiving text communications from unknown senders for the meantime. 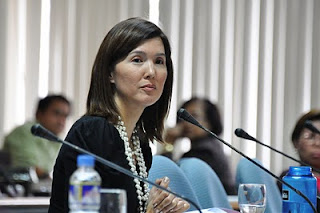 Meanwhile, Senator Pia S. Cayetano, chairs of health and demography committee also advised the public not to panic over hoax text messages circulating this week spreading rumors that deadly radiation from earthquake-stricken nuclear plants in Japan had already reached Philippine territory and is directly threatening the health and safety of the Filipinos.
“These are purely baseless information that radiation and acid rain allegedly caused by the nuclear plant incidents in Japan that reached the country; thus the people should remain calm and vigilant by staying abreast of news developments,” Cayetano said, advising the public to refer to the proper authorities like the Department of Health (DOH), DOST, PAG-ASA, and the Philippine Nuclear Research Institute (PNRI) which regularly reported through media if there is an information received in doubts.
“Let us use instant messaging technology to share useful information only and not to contribute to social anxiety by forwarding unscientific and baseless rumors,” she said. 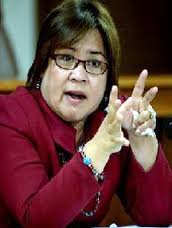 Relative to this, Justice Secretary Laila de Lima directed the National Bureau of Investigation to identify the culprit as soon as possible in the spreading of prank text messages. “The source of the text messages could be held liable for committing crimes against public order under Article 155, Chapter 5 of the Revised Penal Code,” de Lima said, saying that we should not underestimate the consequences of false texts and false alarms and can have injurious consequences and therefore must be taken seriously. “Actions must be taken seriously,” she furthered.
Earlier, a reign of terror spread to the public in the country regarding the radiation meltdown in Japan and circulating advised to the people that they should stay indoors and to wear raincoats if they go outdoors and apply Betadine liquid in their neck to fight radiation.
The said hoax was clarified by the Department of Science and Technology (DOST) that there is no immediate danger in the country and advised the public not to believe in these rumors spreading like wildfire through text messages, emails, internet and other means of communication.
The DOST also advised the public to stop forwarding messages so as not to sow panic among the people, saying that the DOST is committed to bring accurate, reliable, and timely information regarding the Fukushima event and its possible effect to the Philippines. (Jason de Asis)
Posted by Unknown at Wednesday, March 16, 2011

Well, that's the best effort to find the culprit. Only the NBI has the power to monitor who is/are behind the frank messages. Even in the internet it spread like in facebook, twitter, email and other means of communications.