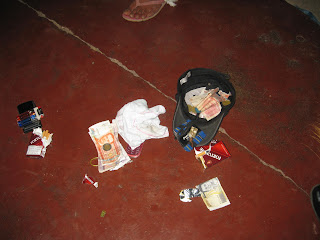 BALER, Aurora, September, 24, 2011-A top executive of the Northern Luzon Command (NOLCOM) lambasted the involvement of a soldier including three civilians after they were nabbed by Baler police in the recent drug net operation at Purok 4, Brgy. Buhangin here Wednesday night, saying that no mercy for erring soldier who will be proven guilty.
NOLCOM Chief, Major General Jessie D. Dellosa said that he will not tolerate the wrongdoings of any personnel under his Command if proven guilty following the apprehension of one Private Jovito Virrey, assigned at 18th Special Forces Company under the Special Operations Command (SOCOM) based in Hagonoy, Bulacan who was caught in the house of suspected drug pusher identified as Francisco Sotero.
“Let the investigations take its course.  That soldier better explain and justify his presence in that area, otherwise, he will have to face the legal consequences of his actions,”  Dellosa said.
“The AFP is bent to weed the organization of scalawags and misfits following controversies particularly those involving former officers. “Our Commmander-in-Chief is serious in his "daang matuwid” (straight path) towards genuine reform, and so are we. If some individuals insist in trekking the crooked path,  it is incumbent upon us being their Commander to prevent a few rotten eggs from spoiling the entire organization,” Dellosa said.
Earlier, police anti-drug operation led by Police Chief Inspector Edgardo D. Togonon, Baler PNP chief of police resulted to the arrest of Private Virrey, his brother Reginal both native of Sitio Virrey, Brgy. Pingit, Ricardo delos Santos of Sitio Baclaran, Brgy. Suklayin, and Francisco Sotero of Brgy. Buhangin
The suspects are now in the provincial jail after the Aurora Philippine National Police Crime Laboratory examined them and confirmed that they were all positive in the drug test aside from having confiscated one (1) heat sealed transparent sachet containing Methamphetamine Hydrochloride otherwise known as “SHABU” weighing 1.20 grams, all in all 15 drug paraphernalia in the possession of Sotero. (Jason de Asis)
Posted by Unknown at Friday, September 23, 2011