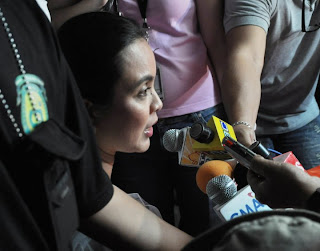 Sen. Loren Legarda (Nationalist People’s Coalition) lamented the continued misinformation campaign against her, stating these were all part of black propaganda meant to pull down her consistent top ranking in election surveys. Legarda was reacting to a smear online campaign alleging non-disclosure in her Statement of Assets, Liabilities and Networth (SALN) of a piece of real property in the United States.

In an interview, Legarda said, “The certification I have in my hand, prepared by my lawyers, is clear: The Statement of Assets, Liabilities and Networth (SALN) I filed in June 30, 2007 includes the New York property subject of the black propaganda, described as ‘Other Investment’ in Annex A, in the amount of P 7,175,000 equal to one-fourth of the total investment in the acquisition of apartment amounting to P 28,700,000.  Beginning December 31, 2007 up to December 31, 2010, the same property was also included on the SALN described as “Equity in Real Property”, also one-fourth of the total P 28,700,000. As of December 31, 2011 and December 31, 2012 the New York property was also included in my SALN described as “Real Property-USA.”
Posted by Unknown at Thursday, May 02, 2013