Disaster preparedness needed in the country 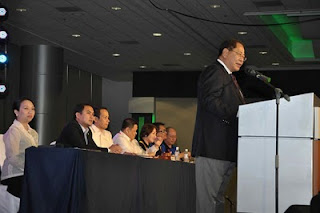 SENATE OFFICE, Manila, March 15, 2011-Senator Edgardo J. Angara Yesterday expressed his concern over the disaster preparedness of the Philippines resulting to more than 2,000 dead from the massive 8.9 earthquake and tsunami that struck Japan last Friday where it set off tsunami alerts in 53 different areas in the Pacific, including the Eastern seaboard of the Philippines and the people living near the coastlines were evacuated to higher ground until the risk of being hit by a tsunami passed.
Angara said that the Philippines is fortunate to have not been severely affected by this catastrophe which crippled Japan despite all their measures to safeguard the people and the infrastructure.
“What if we are not so lucky next time,” Angara asked, saying that the Philippines is not nearly as prepared facing such kind of disaster where the “Natural Disaster Hotspots: A Global Risk Analysis”, a joint study by the Columbia University’s Earth Institute and the World Bank Hazard Management Unit reported that the Philippines is a high-risk area in drought, earthquakes, floods, landslides, storms, and volcano eruptions as the primary indicators combined with mortality and economic loss to establish the risk level for a particular region.
“It was no surprise that the Philippines was classified like that, since we have seen our fair share of calamities and natural disasters which seem to happen more frequently in recent years,” Angara said, saying that the country was hitstruck more than two dozen typhoons a year which rank high in the storm, floods and landslide categories where our archipelago is also part of the Ring of Fire in the Pacific area with several active volcanoes scattered throughout the country.
“The country is among the top 20 worldwide when it comes to emergency loans due to catastrophe,” Angara added, where he believes that there is a need to become more proactive at this point in time and have to establish preventive measures instead of waiting for the next natural disaster that hit the country then scrambling for the right response.
“Knowledge and better preparation facing the disaster will lead the citizenry to lessen casualty,” he said.
Meanwhile, there are more than 80 thousand villagers who were retrieved for radiation threat 20 kilometer exclusion zone away from the Fukushima nuclear power plants for their safety, following the explosion in the place which resulted to 11 casualty and 1 critical in Japan. (Jason de Asis)
Posted by Unknown at Monday, March 14, 2011

The Senator is right. It is everybody's concern. We have to work hand-in-hand to face this problem. The government needs to work for it for the sake of the populace in our country.