Consultation on the proposed postponement of ARMM 2011 election needed 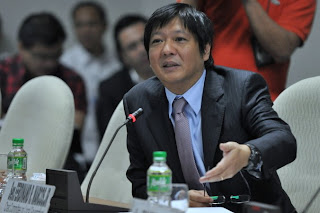 SENATE OFFICE, Manila, March 15, 2011-Senator Ferdinand "Bongbong" R. Marcos, Jr., chairman of the Senate committee on local government, urged Malacanang to establish first the true sentiments of the villagers living at the Autonomous Region in Muslim Mindanao (ARMM) on the proposed postponement of the scheduled elections in 2011 where he said that a consultation should be conducted first in the areas of Basilan, Lanao del Sur, Maguindanao, Sulu, Tawi-Tawi and Marawi City.
Marcos reminded the Palace officials that the deferment of the August 8, 2011 elections in the ARMM should first clearly establish the true sentiments of the people of ARMM regarding the Palace's bill seeking to postpone elections to 2013 and appointing Officers-in-charge (OIC's) in the interim.
The Senator emphasized that the administration must avoid being seen as imposing their own demands particularly in a region whose acronym begins with the word 'autonomous' making the proposed postponement and subsequent appointments of OIC's an irony if not an outright affront to what is core to the charter itself, adding that the 'autonomy' status of that region must give due respect to in the deliberations regarding the elections scheduled for August of this year.
Prior to this, Marcos advised the government’s plan to appoint OICs who shall sit in the meantime until the synchronized elections in 2013 and the postponement of the ARMM August elections this year saying that it is complicated to be understood by the citizenry.
In the view that barangay officials had to have a fresh mandate from the people, Marcos said that the Palace had last year just rejected calls for the postponement of the barangay elections; thus, it was logical that ARMM elections should also be allowed to proceed so that the brothers and sisters in ARMM could freely choose their leaders.
He said that local officials told him that the ARMM villagers would not recognize officials who were just appointed that would cause a great deal of confusion and might deteriorate into a complete political chaos in the place, explaining that appointing officials violates the principle of the mandates of public officials who are supposed to be elected.
Marcos believed that the best way to cleanse political mess is election, an honest, straightforward and clean election then we can be guaranteed that those who will sit in power shall in fact have been chosen by their own constituency. (Jason de Asis)
Posted by Unknown at Monday, March 14, 2011