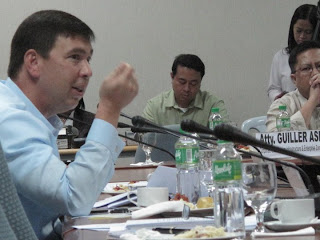 SENATE OFFICE, Manila, March 10, 2011-With soaring prices of petroleum and basic commodities, Sen. Ralph G. Recto, Senate ways and means chair yesterday said that the government may have to sacrifice its “extra-ordinary” revenues from VAT in oil products by agreeing to a reduction that could push downward fuel pump prices.
“The Filipino people would welcome a “sacrifice” by government and oil companies through a possible reduction in the 12 percent value-added tax (VAT) or subsidizing a price rollback for fuel used by public utility vehicles (PUVs), he said,” adding that it was not only oil companies reaping windfall profits from the current situation but also the government from its VAT collection in oil products.
He said that the government earns additional income in the form of higher VAT collection for every rise in price of fuel and aside from VAT reduction, the government could also use its VAT windfall to subsidize a price rollback in diesel used by PUVs to ease the burden on commuters.
“Diesel should be restored to its pre-Libya level to provide relief to the commuting masses and ease pressure on fare rate and prices of basic commodities,” he said.
Recto said that to effect a rollback and restore the diesel pump price to its pre-Libya turmoil level with diesel prices rising by at least P3 per liter since last week, the government could use its VAT proceeds.
“I agree with the calls for sacrifice during these hard times. But, would the government and oil companies be also willing to sacrifice? Recto asked.
The senator urged oil companies to participate in the burden-sharing by absorbing half of the supposed price rollback, saying that the government could subsidize half of the price rollback while oil players will pick up the tab for the rest.
“The government will only shell out P1.50 from its VAT income with the other P1.50 price rollback to be absorbed as “sacrificial losses” by the oil companies and let’s do it immediately, Recto said.
“Oil prices are overpriced and that the oil industry was only cashing in on the unrest sweeping major cities of Middle East and across North Africa,” Recto furthered.
The Senator questioned the government’s shift from ensuring cheaper oil prices to sustaining adequate fuel supply, explaining that this could be misleading since the major Arab oil producers are declaring adequate global supply despite the unrest in the Middle East and North Africa.
He said that motorist in Mindanao and Visayas were already toiling from higher price regime compared to the counter parts in Metropolitan Manila, saying that business sector should cooperate to lessen prices for supply concerns. (Jason de Asis)
Posted by Unknown at Wednesday, March 09, 2011