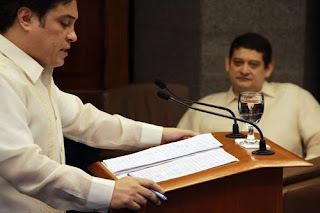 SENATE OFFICE, MANILA, March 29, 2011-Senator Juan Miguel "Migz" Zubiri yesterday formally turned-over the infrastructure projects for schools, public markets and multi-purpose buildings in Davao City and Davao del Norte through his One Town, One Project or OTOP.
Zubiri led the ceremonial turn over along with Representatives Anton Lagdameo (2nd District, Davao del Norte) and Mylene Albano (2nd District, Davao City), with local chief executives Mayor Lolita Moral (Braulio E. Dujali), Mayor Marcelino Perandos (Carmen), Mayor Maximo Estela (Sto. Tomas), and Mayor Sara Duterte (Davao City).
Governor Rodolfo Del Rosario joined Zubiri in the ceremonial distribution of nine million peso projects at the Davao City Provincial Capitol where it was witnessed by the Mayors Joseph Parenas, Edgardo Timbol, Rosabella Abelita-Nana, Basilio Libayao and LMP President Mayor Nestor Alcoran.
The Bukidnon solon also conducted consultation on the proposed plan to postpone the ARMM elections on August which started since last week where he stood on the Senate floor on March 21 and strongly criticized House Bill 4246 or the measure that seeks to postpone ARMM elections and Malacanang plan to appoint caretaker officials in the region instead, saying that such move is a threat to democracy and viewed as an impending death of the people of Mindanao's right to suffrage.
He said that he stood as a senator from Mindanao and tackled Mindanao issues and concerns where he flew to Cotabato City and some areas in the former province of Shariff Kabunsuan last Thursday to consult with the Muslim leaders and for the record most of them were not politicians at all.
The result of the recent dialogue with the teachers, students, doctors, nurses, government employees of ARMM, soldiers, policemen, Imams and leaders of their religious faith exposed that they were very wary of the idea of postponing the elections of ARMM in different degrees of convictions, they were, however, all unanimous in opposing the plan of appointing the leaders of the region and literally taking away the right to choose who should lead them.
The Senator urged the COMELEC to push through with the preparations for the ARMM elections in August despite the perceived pressures from powerful parties in favor of postponing it, saying that the Muslim lawmakers opposed the move for postponement and appointment on ARMM for the reason that it is undemocratic and unconstitutional.
“Why are we not listening to them in this issue? Aren’t the Muslim lawmakers the representatives of their people?” he asked, explaining that it would be tantamount for example to forcing changes in the democratic process of Bicol without the support of our Bicolano congressmen and senators and only using the power of the majority to subvert their will.
“Wouldn't that be going overboard with a presidential prerogative and even bordering on the dictatorial?” Zubiri asked, stressing that reform should indeed be made in the Mindanao region or in the entire country but not at the expense of democracy and freedom.
Relative to this, Senator Bongbong Marcos advised the government to establish first the true sentiments of the villagers living at the Autonomous Region in Muslim Mindanao (ARMM) on the proposed postponement of the scheduled elections in 2011 where he said that a consultation should be conducted first in the areas of Basilan, Lanao del Sur, Maguindanao, Sulu, Tawi-Tawi and Marawi City.
Marcos reminded the Palace officials that the deferment of the August 8, 2011 elections in the ARMM should first clearly establish the true sentiments of the people of ARMM regarding the Palace's bill seeking to postpone elections to 2013 and appointing Officers-in-charge (OIC's) in the interim. (Jason de Asis)
Posted by Unknown at Monday, March 28, 2011

The two senator's were right. A proper consultation should be conducted for the benefit of the ARMM's people to ensure that the Muslim's rights is exercise.