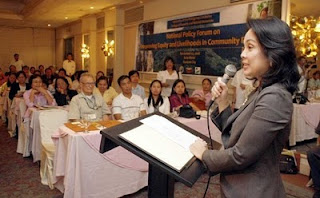 SENATE OFFICE, Manila, March 11, 2011-In the recent 8th Philippine Councilors League National Congress held at the SMX Convention Center, Pasay City, Senator Loren Legarda, principal author of Republic Act 9729 otherwise known as the Climate Change Act of 2009 urged the local legislators to take the initiative in passing local ordinances in their communities disaster-resilient by translating national environmental climate change and disaster risk reduction laws that she created for the concern of their populace.
Legarda, the UNISDR Asia-Pacific Regional Champion for Disaster Risk Reduction and Climate Change Adaptation said that the Philippines has already established the national policies on disaster risk reduction and climate change adaptation through the Climate Change Act and the Disaster Risk Reduction and Management Act (RA 10121) and the climate change is one of the most daunting issues that the country and the rest of the world faces today.
In her delivered speech, she said that there is a need to back it up with actions from the local level in every town, city or municipality saying that the councilors have the responsibility to translate these laws into local ordinances that would fit into the specific needs in their respective locality and constituent.
“Climate Change Act empowers and equips local government units with the necessary mandate, knowledge, skills and tools, to develop their own disaster risk reduction and climate change action plan within their jurisdiction as a way to reduce losses in life and assets due to disasters,” She said, adding that to win this battle, there is a need to intensify initiatives that have been taking roots in local communities where they are already familiar in the place the vulnerable disasters prone areas to be considered for quick action.
Legarda said that local leaders should ensure Local Government Unit’s programs that are ready for climate change where she said that there is a need to work hand-in-hand for our political will and actions for safer schools, hospitals, for disaster-resilient cities and municipalities so that everybody can be a climate heroes fighting against risk. (Jason de Asis)
Posted by Unknown at Thursday, March 10, 2011